Book Promotion: Her Heart for the Asking by Lisa Mondello (Review Bk.1) 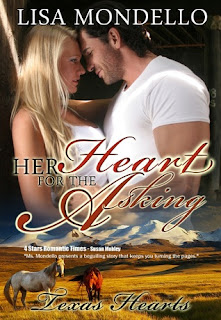 Summary: Mandy Morgan swore she’d never step foot in Texas again after Beau Gentry left her for life on the rodeo circuit eight years before. He once promised he'd love her forever. But he'd abandoned their love for the rodeo and she hadn't seen him since. Now she's back in Texas. Her uncle’s heart is failing and Mandy has to convince him that surgery will save his life. She never dreamed the first thing she’d see when she stepped off the plane would be her biggest nightmare...the one man she’d never stopped loving.

Beau Gentry had the fever for two things: the rodeo and Mandy Morgan. But for Beau, loving Mandy was complicated by his father’s vendetta against her uncle and a promise he'd made to an old friend. Hank Promise, Mandy's uncle, was more like a father to Beau than his old man had been. The hardest thing Beau had ever done was leave Mandy behind for the rodeo. He can still see the bitterness and hurt on her face. It has killed him all these years to think Mandy had forgotten him...maybe even in the arms of another man. But now they’re both back in Texas, and Beau's going to do all he can to win back her love.


Excerpt HER HEART FOR THE ASKING

"What are you doing here?" Mandy Morgan asked, dropping her too-heavy overnight case on the sun-roasted tarmac. After a grueling forty-eight hour work stint and a five-hour flight from Philadelphia, she stood wilting under the brutal Texas sun, facing her biggest nightmare.

She groaned inwardly, drinking Beau in with her eyes as if she hadn't had a drop of water in months. Eight years was more like it. If she were eight years smarter, she would be moving her aching feet as fast as she could in the opposite direction. But all she could do was stare at eyes so bright they rivaled the blazing sun. At lips so kissable she'd spent the better part of her adult life trying to wipe the memory clean from her mind.

She had expected Beau would have aged some. When she allowed herself to think about him at all, she reminded herself. The faint lines etched in the corners of his sleepy gray-blue eyes gave a hint of maturity, but most probably caused by long days in the cruel sun.

She fought the urge to take a closer look at his ruggedly handsome features, but failed. How could he have gotten better looking after being abused by every bronc-busting horse on the rodeo circuit? His angular jaw, strong and determined, was shaded with beard growth that was probably a day old, maybe more. Mandy suspected if Beau grew a full beard, it would grow in thick and be the smooth texture of his almost black head of hair. She forced aside past memories that gave her such knowledge with renewed irritation.

The man didn't even have the decency to have a crooked nose. What should have been bent and awkward from being broken a few too many times was instead long and straight, shaped perfectly between high cheek bones most women would swoon over, or kill to have themselves. But on Beau Gentry, it was just one thousand percent robust cowboy.

"I'm your ride out to the Double T," Beau said, gripping the edge of his white straw cowboy hat and tipping it in a cordial gesture.

She ground the heels of her low pumps into the soft tar to contain her growing irritation. Did he think she was an idiot? "No way."

"'Fraid so," he said, his expression slightly askew. "Hank didn't mention anything about you coming to get me when I spoke to him on the phone."

"I suspect he thought you would have found some excuse not to come if you knew I was picking you up."

"He would have been right. Why didn't one of the hands come get me?"

Settling his hand at the base of his neck, Beau replied, "You're looking at him. As of three weeks ago I am one of the ranch hands at the Double T." 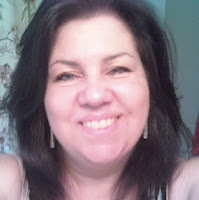 You can find more information about Lisa Mondello at http://www.lisamondello.blogspot.com or chat on Twitter at @LisaMondello http://www.facebook.com/lisa.mondello.1
Posted by Christina @ Biblio Thoughts at 12:01 AM