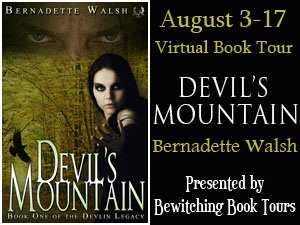 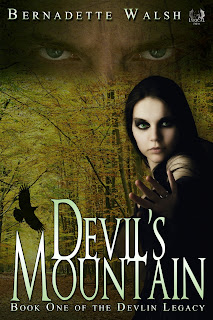 Mary Devlin accepted her fate years ago, to serve Slanaitheoir, the mountain spirit who saved her ancestors from the Irish Famine. The hauntingly beautiful woman submitted to His every caress, His every humiliation, but He’s gone too far by threatening her family.

Mary’s daughter-in-law is now an unwitting pawn in the fickle spirit’s game. Mary must challenge her fate and that of all future Devlin women, but Slanaitheoir is the most powerful being in the land. And when part of her still yearns for His touch and love, how can she fight him and win? 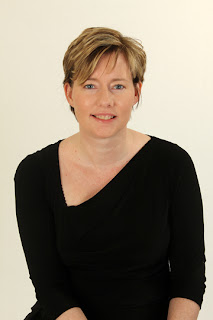 Bernadette Walsh has been writing contemporary and paranormal romance for four years. She has published three novels to date (The House on Prospect (Echelon Press) and Gold Coast Wives (Lyrical Press)) and the first book of her paranormal trilogy, Devil’s Mountain -- Book One of the Devlin Legacy. While Bernadette has hopped around genres, all of her books to date have a common theme: strong women handling what life throws at them the best way they can.

Marcie, one of the Wanna-Be Manhattan Moms who had also experienced success, lived a few blocks away on East 85th Street. A group of successful Wanna-Be Manhattan Moms had formed a little Upper East Side sorority. We would go to Mommy-and-Me classes, play dates and at times babysat for each other. I’m not sure exactly what happened to the not-so-successful Wanna-Be Manhattan Moms. None of us mentioned them.
Marcie agreed to babysit Aidan while I went to my acupuncture appointment at the Yorktown Natural Fertility Clinic. Bobby refused to go back to the New York Infertility Institute. In fact, it was all I could do to convince him not to use condoms. “I’ve got my beautiful wife and my beautiful son,” he said in a sing-song voice whenever I raised the topic of another child. “That’s all I want. That’s all I need.”
Why wasn’t that all I needed?
The first few months of Aidan’s life, I was completely satisfied. I’d never been so happy or imagined I could be so happy.
But then, the old familiar niggling started. I’d take Aidan in his stroller through CentralPark and see a woman pushing twins in a stroller. Or a mother holding the hands of a small boy and a girl. And I would get that sour taste in my mouth, the same one I had tasted for years whenever I saw a pregnant woman.
And so it began.
I couldn’t very well steal a vial of Bobby’s sperm and take it with me back to Dr. Feinberg’s office. But we had, somehow, managed to conceive Aidan on our own. Perhaps with some Chinese herbs and acupuncture we could conceive again. Marcie swore by acupuncture, and after she had been thrown out of two Manhattan IVF clinics she tried traditional Chinese medicine and conceived her own miracle baby. Why couldn’t I too, conceive a little miracle baby with the help of magic teas and shiny needles?
Just one more, I thought to myself as I opened the heavy glass doors of the Yorktown Natural Fertility Clinic. “Just one more miracle. And then. Then I’ll be happy and content.”
I promise, I silently swore to God, the universe or whoever else might be listening to my thoughts.

A row of needles lined my bare stomach. They were in my ears, on my wrists and even
between my toes. The acupuncturist, a hippy-looking woman in her mid-fifties with frizzy red hair, twisted the needles between my toes once more before she lowered the lights and left the room.
The first five minutes were always the hardest. Inevitably at least one of the needles would burn. Dr. Hippy-Dippy said that meant it was working. It was all I could do not to rip the offending thing out.
I breathed in and out slowly, and tried to focus on my breathing, on anything rather than the needles. As I lay in the darkened room, with only the sound of a small fan to block out the traffic from Second Avenue, my shoulders, which had felt like they were jacked up below my ears, relaxed. I continued my purposeful breathing and closed my eyes.
Someone took my hand. I opened my eyes and was no longer on the table, but clothed in a long red robe and standing in a forest. And the most beautiful man held my hand.
“My love,” He said, His voice harsh and guttural. And somehow familiar.
A lone ray of sunlight made its way through the heavy woods and shone on His black hair. His pale skin glowed and His jade eyes glittered in the low light. They drew me in.
Without another word He led me to a roaring fire outside of a cave. The fire was hot, and a small bead of sweat formed on my upper lip. The man unbuttoned the red robe and took it from my shoulders. Underneath I wore only a thin sheath of white silk that hid nothing from His probing gaze.
I should have been embarrassed, but the hungry look in His hypnotic eyes stirred a fire within me. With a finger, he gently followed the lines of my plump, full breast.
“So ripe,” He whispered in a harsh rasp. “So fertile.”
That word hit me like a hard slap. I turned away. “No,” I choked out, “I’m not.”
He pulled me to Him, His lips mere inches from my own. His musky breath filled my
nose. “You could be.” His lips covered mine. At first soft, like the finest silk, but then more forceful, moreurgent. My passion soon met His and I couldn’t help but run my fingers through His magical hair as he devoured my lips.
He tore the sheath in two and it fell away from me, leaving me naked. His green gaze bore through me, and it was almost as if I could feel the very cells of my body change. My breasts felt heavier and skin softer, my lips fuller. It was as if He transferred His own beauty to me. I ran my hands across my face first, and then my breasts, my nipples, taut and tender. Instead of being embarrassed, I reveled in my newfound beauty.
My skin was hot but His hands were hotter and they almost burned my flesh as they explored every inch of me. Every touch brought both pleasure and pain.
I pulled at His golden shirt, eager to see all of Him and He seemed surprised by my daring, my need for Him. He smiled, like a wolf about to catch His prey, and ripped the silk from His body as well.
This nameless man pushed me onto the soft grass beside the fire. Starting at my toes, His scalding tongue sucked and bit me. As He traveled up my calf and along my thighs, I trembled, not with fear, but with a hunger I’d never felt before. A ravenous, ancient hunger.
He spread my legs and His rough, scalding tongue explored me, possessed me. Before I could climax, He stopped.
“Don’t,” I begged. “Don’t stop.” His animal gaze bored into me. “Are you mine?” I threw my head back and arched my back, inviting Him to enter me. “Yes, yes. Go on!”
“Are you mine? Will you give me what I want?”
My skin was on fire, dying for His touch. “Anything,” I moaned.
A terrible smile contorted His beautiful face. “Don’t you want to know what I want?”
I couldn’t take it anymore. I rubbed myself against Him. “Anything. You can have
anything.”
“I want you to have my child. I want to share the blood with you.”
I don’t know where I got the strength, but I pushed Him off me. He lay on his back, more
surprised than hurt. His eyes darkened, but before He could get up I pounced on him, lowering my swollen sex onto Him, allowing Him to fill me. I ground into Him and felt Him grow even larger within me. I rocked back and forth, overcome with ripples of orgasms as I fucked Him, as hard as I could. Like a woman possessed.
Like an animal.