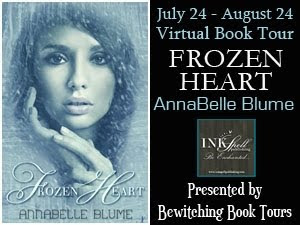 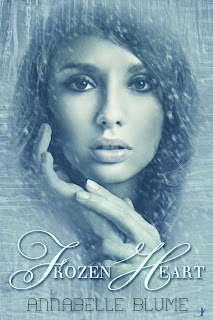 Tagline(s): A decade surviving on her own. Three days with the enemy. Can love conquer all?

Summary: Cressenda knows how to survive. With her sled dogs as her only companions, she’s spent the past ten years hiding in the snow covered wilderness from the oppressive regime of the Affinity. When a routine trip to civilization takes a turn for the worst, Cressenda is forced to take refuge with the enemy or lose her life to the frozen countryside.


But Beckett, a Guard of the Affinity, is more than a man in uniform. His desperate need to help Cressenda escape both the blizzard and the Affinity, makes her feelings for him all the more troubling. Will Beckett be true to his word and set Cressenda free? Will her heart let her leave after all they’ve shared?

REVIEW WILL BE POSTED LATER TODAY. SORRY FOR THE INCONVENIENCE. 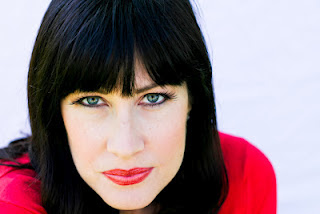 Annabelle is a Science Fiction and Urban Fantasy Romance author, that is, when she's not checking homework or begrudgingly cooking dinner. Wife, mother, and creator of alternate worlds, Annabelle has a penchant for that which is outside the norm.

Her Sociology degree did nothing to progress her writing skills, but has given her the ability to construct worlds that exist only in her head and translate them passionately to the page. The time spent studying individuals, interpersonal relationships, and particularly, women, within the constraints of our society led to Annabelle's unabashed ability to talk about sex as it fits into our modern lives.

She's also the author/personality of The Bombshell Mommy at Vitacost.com, where she expounds her knowledge of being a vixen clad in sweatpants.

“You…you’re a...sympathizer.” It sounded dirty as the words passed between my lips. I wanted to snatch them back and swallow them down again. The sting of my insult was evident in the painful expression that settled on his face.

“It doesn’t matter what I am. You want to be free, don’t you? Then go.” His authoritative facade crumbled and the innocent hurt of a young boy dripped from his soul as he spoke. “You won’t get far enough if you don’t get out now.”

I placed my hand over his, unlatching his fingers one at a time from the tender inside of my bicep. My steps were measured and controlled as I backed away from the Guard. I neared the clear walkway of the Trade Path just as a shrill alarm sounded. Every transaction halted and everyone held their breath for a split second, merchants and traders alike. In the blink of an eye, the entire population of the Path turned to the entrance and moved hurriedly, as if they were trying to contain a generalized franticness.

“What is it? Where are they going?” I asked no one in particular.

I cursed. A blizzard. I’d never make it home now. Conditions would be impossible: no visibility, forty-foot snowdrifts, and gale-force winds. The boys and I would never survive. I stood, motionless, while bodies spun and twirled on the periphery of my consciousness. I was stuck in the Collective with nowhere to go and, worse, nowhere to hide.

“Come with me,” the masculine timbre commanded over my shoulder before lacing his fingers in mine. His gentle hold of my hand gave me comfort and lulled me into a hypnotic state. The Guard led me forward until I broke from my daze.

“Let me go!” I yanked my hand from his. “I have to get out of here. I have to beat the blizzard.”

Before I could break into a sprint, the Guard whirled me around. I teetered, stunned by the force. He moved in close and arched over me while he spoke. Not to intimidate but to cover me, protecting me from the eyes around us.

“You’ll never make it. Never. Come with me. You can wait out the storm at my cabin. When it’s over, you’ll be free to go.” His eyes searched my person for the answer to the question in his mind. Wherever it is you live.

I stared at him, doubtful and distrusting. I had only seconds to decide if this tall, hulking citizen of the Collective, official of the Affinity, could really, truly be a sympathizer.


Writing in the Age of Social Media

This is an amazing time to be an author. Don’t let anyone tell you any different. There are so many ways to get your book out into the world. Doors and windows and strange little trap doors in the floor of a room you had long since written off have opened up all over the place.

The once-was elusive world of publishing is now an open book (pun intended). Agents have websites allowing writers access to everything from their “wish” list for new books to acquire to their query guidelines and whether or not they’re open to submissions. There’re no longer only Big New York Publishing Houses, rather a wide breadth of independent publishers operating under a variety of different business models from traditional publishing to co-op style houses. Then, there’s self-publishing, which thanks to the rise e-books, is easier than ever before.

Additionally, you have so many ways to reach your audience these days. Reader-centric blogs (like this one), fan pages on Facebook, author profiles on Goodreads, and my favorite, Twitter, are new and exciting tools to promote your book and yourself. These social media outlets are public relations teams, marking departments, advertising arenas and on-the-job training courses all rolled into one. On Twitter, not only can you ask questions and learn the ins and outs of the industry from friendly and supportive authors, you can actually ask agents questions, get real-time information and news in the publishing world, and interact with other writers and readers.

I learned the majority of what I needed to about writing, editing, and submitting a manuscript for publication from diligent research on the internet. I asked questions on Twitter and frequented blogs by various authors, editors and agents, all who want to see authors succeed. These individuals share their priceless knowledge and experience when they are under no obligation to do any such thing. This is a gift, and it should be valued accordingly, for it is priceless.

While there are some small hitches in the publishing world and the ever present cyber arguments about whatever topic du jour is riling people up, overall, if scrutinized with a keen eye, it’s easy to discern between who’s speaking truths and who’s spouting falsehoods. Don’t pass up the opportunity to learn from those that have gone before you. The amount of time, effort, and heartache you’ll be saved on your road to publishing success is immeasurable.

If ever there was a right time to commit to the lifelong dream of publishing a book, this is it. This is your time. This is our time. Now go write something!