FBF Book Spotlight: A Want So Wicked by Suzanne Young 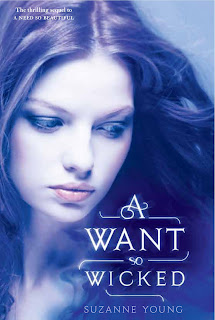 Elise is a normal seventeen-year-old girl until the day she wakes up in a desert park with no idea who she is.

After that episode, her life takes a bizarre turn. She's experiencing unexpected flashes of insight into people's lives—people she's never met before. Strangers frighten her with warnings about the approaching Shadows. And although Elise has never had a boyfriend, she suddenly finds herself torn between two handsome but very different young men: Abe, the charming bad boy whose effect on her both seduces and frightens her, and the mysterious Harlin, who's new to town but with whom Elise feels an urgent, elemental connection—almost as if they are soul mates.

Now Elise begins to question everything about her life. Why do these guys both want her so desperately? What are the Shadows? Why does the name Charlotte inspire a terrifying familiarity? And who is Elise, really?

All you have to do to enter to win each week is sign up using the entry form on the left sidebar. Winners are chosen at random and posted on the site every Friday morning. Hence the name, "Free Book Friday!"
Posted by Christina @ Biblio Thoughts at 8:06 PM