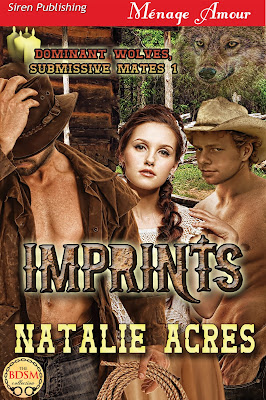 Two pack masters discover an unyielding love in one woman by altering customs and forming new traditions destined to change the Wyoming Territory forever. Imprinting upon and sharing a lover, the Alphas realize their packs must join together, but they will face great opposition when their chosen mate is confronted with a wrenching decision.

Pack masters Frank Smith and Jock Corrigan aren’t enemies, but they aren’t exactly friends. Still, their similar fates have been altered by an unusual union they cannot deny. Their relationship with Carla Cassidy forces several wolves to make their independent choices. One will stand with the newly formed pack, but another will fall victim to his own selfish needs and motives. A group of new shifters will emerge and change the course of history, but not before the expanding pack’s goals are tested and tried.


“What are you doing here?” Carla asked, propping her tiny clenched fists on her hips.

“Far be it for you to show a little appreciation,” Jock said, studying the spitfire of a woman before them. Wearing a light blue prairie dress, Carla apparently hadn’t stopped to check out the torn fabric and soiled material.

“You were attacked by a pack of wolves. I arrived in time to run them off.” Jock stood a tad taller with his announcement. Most women appreciated heroic efforts.

She paled then as he spoke. She looked down at the evidence of a ruined dress and her hands twitched.

“How did this happen?” Carla asked, suggesting her memory had failed her.

“You must’ve had a nasty bump on the head if you don’t remember,” Grant told her.

She held the heel of her hand to her forehead. “Everything is a bit foggy.”

“Well, don’t you fret none, Carla. We took care of ya.” Grant shot Jock a quick glance. “Yep, siree. Me and Jock here handled everything.”

Jock was beginning to think whenever there was a “yep, siree,” added to Grant’s speech it was nothing more than a bald-faced tale.

“Do you remember going to the barn?” Jock asked.

Carla took a minute before she answered. As if she suddenly recalled something of interest, her cheeks turned pink and she said, “I may have already been in the barn.”

Grant shot her a wink and a lopsided nod. “That was my best estimation, too.”

“Dear God,” Jock grumbled, beginning to believe Grant must’ve considered himself the most intelligent man in the West.

“Here’s how I figure things went down. Those wolves heard a lot of activity, maybe even some squealin’ and carryin’ on comin’ from the barn…” He paused and arched a brow. “How am I doin’ so far?”

Carla stared at him with this perplexed look which made Jock wonder all the more. Had Grant really watched Carla in action with these wicked props he’d mentioned?

“That’s all right, sweetness. Don’t worry ’bout a reply. I can make heads and tails out of this. Anyhow, you were in the barn doin’ whatever it is that you do out there—in the loft—and well, what I came up with after a-prowlin’ around is that you were makin’ a little too much noise.” He stood taller and his lips spread into a mischievous smile. Leaning against Jock, he added a whisper, “How’d I do? Did ya like that?”

“What sort of squealing?” Carla arched a brow and watched them through suspicious eyes.

Grant shrugged. “That voice of yours is as fine as cream gravy when you go to hollerin’ and such.”

“Grant,” Jock muttered, giving his buddy a one-word warning he would inevitably ignore.

Copping a strut, Grant approached the porch, working what little swagger he possessed. “Come on, Carla. You know what I mean. You can’t kick up a row and expect no one to hear ya. I ain’t been a man for all these years for nothin’. I can spot an experienced woman.” He cupped his ear, slung his arm off to the left, and quickly added, “And I can hear one from way over yonder.”

Before Jock had a chance to smooth things over, a disgusted gasp fell from Carla’s mouth. “Well I’ve never in my life.”

“Me neither,” Grant admitted. “But after what I’ve witnessed, I’d be the first man to say you are a soiled dove to the manner born. And I’d be the first to mention yer geared up to teach even an experienced fella a thing or two.”

Carla’s eyes filled with tears. Before Jock saw the slap coming, she opened her hand and her palm connected with Grant’s cheek.

“I don’t know who you think you are, Grant Ford, but if you’re trying to make a mash on me, I can promise you, I’m not impressed!”Grant stared back at her with wide eyes. “Surely to God you ain’t offended.”

And of course after that, Miss Carla Cassidy did what Jock suspected she might. She walked inside, slammed the door in their faces, and never so much as bothered to say good-bye.

“I like ’em a little hot under the collar. Trust me, friend. I know what I’m doin’. Let’s go for a run. When we get back, she’ll be fit to be tied—and I mean that in the literal sense.”

Jock couldn’t help but think about Grant’s earlier words. One of these days, Carla would open the door and greet her husband. Considering what had transpired, Jock had a feeling she’d slam that door just as quickly if she thought her potential suitor was named Grant Ford.

A Bibliophiles Thoughts on Books
http://bibliophilesthoughtsonbooks.blogspot.com/