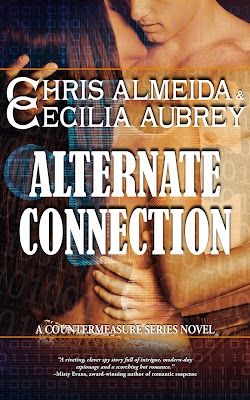 CIA operative Nathan Nelson has built his life on secrets. Secrets about events that have shaped him into the man he has become. Events that taught him to keep his shields up. He has kept them buried in the past and nobody—not even Cassandra Bauer, the woman he claimed to love—knows of them. Now, those secrets have come barreling down on him at the worst of times.

Foreign Service Specialist Rachael Moore's personal crusade puts her in the crosshairs of very dangerous people. She would risk everything to achieve her goal even if it means exposing her battered heart and deeply concealed dreams to a man who doesn’t know the meaning of love.

Unbeknownst to both, their reconnection may not only bridge the chasm between the two of them, but shed light on a puzzling mystery. Their perilous journey becomes a race for their lives, leading them into a conspiracy rooted deeper than the tangled emotions between them.

Will their collaboration shatter the tenuous link woven in the past or forge a bond they never expected could exist in the future?

ALTERNATE CONNECTION is the third novel in the COUNTERMEASURE SERIES.

The next installment of the COUNTERMEASURE SERIES has a tentative release date set for November 5th, 2013. The story continues where TO RUSSIA WITH LOVE left off and pursues a parallel between Trevor and Cassandra Bauer’s quest and a daring attack on US nationals.

Nathan shook his head and pulled out the first folder containing the personal file of Gerald Blair, U.S. Envoy to the Middle East. The report was thorough and contained a detailed account of both his professional and personal life. He raised his eyes to Hanson. “Do you want to split’em?”

“Nope. I’m done with them. They are all yours.”

“While I waited for the fax. I’m a fast read, Nelson. Keep that in mind.” Hanson’s lips quirked in a cocky grin as he leaned his seat back and closed his eyes. His disheveled appearance and the hickeys decorating his neck a clear indication he needed some shut-eye. “Let me know when you’re done so we can discuss the details.”

Nathan sank in his own seat, his mind teeming with questions. Questions he didn’t think he would have answers to any time soon. He had a long analysis ahead of him considering he was also looking for pieces of a puzzle unknown to Hanson. Unlike Hanson’s, Nathan’s focus also encompassed the files belonging to the two agents and two drivers who’d been killed in the attack.

With that in mind, he returned his attention to the folder and began studying the first of the people they were supposed to know inside and out before they set off for ground zero.

As he read through the pages, he looked for inconsistencies, hidden information, or activities that could have made Blair a target. Anything that could have put them all in the crosshairs of whoever had taken them.

The situation was more complex than the usual hostage kidnapping. While religious extremists were quick to claim responsibility, those who’d abducted the six remaining members of the diplomatic convoy two days earlier hadn’t made any demands through the media. They’d simply dropped off the radar as if they’d never been.

There had to be a reason for that divergence from the usual and that reason could very well be tied to Nathan’s prime directive. The answer could be in any of their past or present and, if he was to be successful, he had to find it.

He beat his way through Gerald Blair’s file and took notes as he moved through. Blair had been in extensive contact with Palestinians and Israelis—unavoidable contact since it was an integral part of his job to mediate peace in the region—and that in itself could have placed a target on his back.

Nathan set Blair’s file aside and moved on to the next in the bundle. As he flipped it open, his whole body stiffened in his seat. A buzzing noise flooded his ears, and his sight dimmed. His field of vision narrowed to the picture on the page and the name listed—Moore, Rachael. Status: Widow. Rae.

His blood iced in his veins. For a moment, he felt detached from reality expecting someone to pop up in the seat in front of him pointing a camera and screaming, “Gotcha!” He fixed his eyes on the file again. Phillip Moore’s wife. Was that why Hanson had made that comment about setting personal involvements aside? Nathan stared at her familiar image for a moment before diving in. Some of the information in it was known to him. Some was brand new. He read the declassified report on Phillip’s death with a heavy heart and the thumping in his chest rose to such a loud racket he thought it would wake Hanson from his beauty sleep.

The more he read about Rachael, the more his frown deepened. Why was she working at the embassy in Israel? How had she come to be assigned as a personal assistant to Blair?

Phillip had been crazy about her, and Nathan understood why as soon as he’d met her. At the time they met, she’d been working on a business associate degree with some difficulty due to the sudden transfer to the US. Neither had mentioned she dabbed in international politics back then. Had she made a career change after Phillip’s death? Guilt punched him in the gut and he held his breath, squeezing his eyes shut to keep self-flagellation at bay.

He’d gone through that cycle many times before. He wasn’t about to slide down that road again. If that was how he could redeem himself, he was going to take it.

Writing had touched Chris Almeida’s and Cecilia Aubrey’s lives in different ways through the years but had never taken flight. It was in 2010, when Chris and Cecilia met and began role-playing online as a hobby, that writing placed itself front and center in their lives.

Chris and Cecilia have since chosen to release all their titles independently. They have several short stories and two novels published under their own label, Éire Publishing, and are vocal supporters of independent publishing done right. They are currently working on the third novel in their series. Through all the chaos and laughter, they still hold true to their roots, bringing their favorite role-play characters and stories to life.

You can enter the two Rafflecopter giveaways below. You can enter the draw for one of 10 Countermeasure Series Swag Packs containing nine bookmarks and a bracelet (I *heart* ALPHA GEEKS) and also enter the giveaway for a chance to win a digital ARC signed copy of ALTERNATE CONNECTION once it becomes available.

Thank you for joining us!


10 SWAG PACKS GIVEAWAY:
a Rafflecopter giveaway
Posted by Christina @ Biblio Thoughts at 12:00 AM