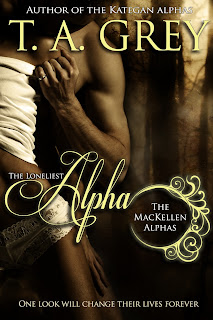 The Loneliest Alpha
The MacKellen Alphas, Book One
T. A. Grey

One look will change their lives forever.

Lingerie designer Alicia Clarkson just had to open her stupid mouth. Now thanks to trying to defend a fellow pack mate, Alicia’s been blindfolded, tied up, and carted off to the new alpha of the Oregon pack—Gavin MacKellen.

However, the blindfold doesn’t come off so soon. Alicia’s curiosity gets fired up when Gavin refuses to reveal his face to her. Just what happened to him? He talks to her from shadowy corners and behind closed doors. The man is as allusive as a squirrely fox, but Alicia doesn’t play games and the quiet spoken, hoarse voiced alpha doesn’t stand a chance against her. They settle on an agreement, thirty days for them to get to know each other because that’s the only way this cowboy alpha will have it.

Gavin MacKellen needs a mate. But he knows no good woman would ever want to look at his face after the incident he suffered. After one look at Alicia Clarkson all his plans fly out the window. The woman’s beauty has him damn stunned speechless. She torments his thoughts and Gavin finds himself yearning to know everything about her. As relationship forms, love threatens to grow between them but Gavin struggles to cope with his physical appearance in the face of the beautiful Alicia.

Will she be the one to stand in the face of a monster and accept or will she turn her back on him as everyone else has?

“When is the last time you were with a man?”
Her body jerked. “Excuse me?”
He sighed, the sound thick not with impatience but caution. “I won’t repeat myself, Alicia Clarkson.”
She froze at the sound of her name even as a part of her understood that he had to know her name. The tone of his voice had changed though, the grating sound becoming a growl.
She answered as soon as she collected herself. “Seven months ago. No six. Yeah, six months, I think.”
“Were you sleeping with him?”
She bit the inside of her cheek, jaw flaring as a blush covered her face. “I don’t see what this as to do with–”
“Just answer the question,” he said in that slow, measured voice. He sounded like someone who didn’t waste words but chose them with care.
“Yes, I did.” Why that admission embarrassed her when she knew there was no shame in what she’d done annoyed her.
Then he spoke and every inch of her stiffened. Even her heart skipped a beat. “What do you look for…in a man?”
“What?” she said, her voice as soft as a whisper. He sounded curious, maybe even a little embarrassed.
“Answer the question, please.”
She shook her head sending locks of hair snapping across her cheek and stood, teetered, then widened her stance to steady herself. “No, I’m done with this. I won’t play your little games anymore. You either explain what this is about or untie me. Actually, untie me and show me the door. I’ve been ready to leave since I got here.”
He stood and she took an abrupt step back. Was it because she feared him—damn right.
“Turn around.”
“Like hell.”
“Turn around so I can untie you.”
Biting her lip, she debated his words. He could by lying. “Promise that’s all you want?”
He grunted some sound of agreement.
She was loathed to give him her back but she did, slowly. Better to show him her back than to keep the ropes on for god knows how long. He grabbed the rope binding her wrists and her heart jumped with fear. He could kill her; hurt her in so many ways.
“Stare straight ahead.”
Naturally, she tried to look over her shoulder but he grabbed the back of her head and turned it to face forward before she could catch a glimpse.
“Don’t.” A warning.
It became difficult to breathe. This close, she caught his scent. It was fresh and masculine smelled of something rugged and outdoors. The lykaen in her rolled onto its back and stretched, content. Whoa. Reel it in, Alicia.
She jumped at the sound of his voice so close to her ear. He had a gravelly, coarse voice, deep as a bass singers. He held the rope hostage as he spoke. “I’m searching for my mate, not lookin’ for no whore. I want you to stay here while we get to know each other. That means I’m gonna have some questions you’ll need to answer. You got that?”
Not really. “Yeah,” she said instead since she didn’t see any other options.
Another grunt of approval, then she heard the metal swish of a switchblade coming out. She wiggled, tugging to get her arms free as fear rode her.
“Please don’t hurt me.” She hung her head, arms trembling in his grasp.
“Stay still. I don’t wanna nick you.”
Like that her fear passed. The blade passed through the ropes with ease and her shoulders sagged with relief. The itchy, cursed rope fell away. She smiled at the tiny pleasure of being free.
“You’ll sleep down the hall. I’ll have Will show you the room.”
Fingers touched her forearms, strong and direct. And then it vanished in an instant.
Rubbing her arms at the sudden chill, Alicia turned back only to find he’d retreated back into the shadows.
She didn’t mean to ask it but the words flew from her lips. “Why won’t you let me see your face?”
He opened the door, stepping into the hallway. She was so certain he wouldn’t answer her that she fiddled with her reddened wrists to hide her eyes.
But then he did answer and his words couldn’t have shocked her more.
“I don’t want you to see my face ‘cause I’m an ugly son of a bitch and you’re too pretty to be looking at that.”
She gaped as he quietly shut the door behind him. 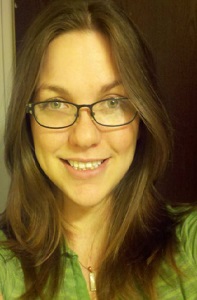 I love to write the kind of stories that will keep you up late at night and make your heart pound. It's my goal to make each new book better, more exciting, and more action-packed to keep thrilling you. I'm always trying to push the boundaries with my imagination, and yours, to create something new and different.

Visit my website to learn more about my books at www.tagrey.com.