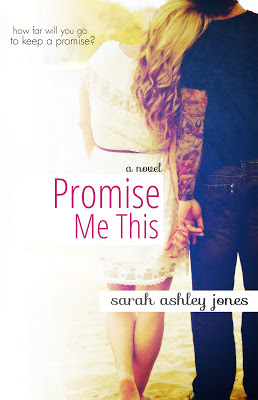 Promise Me This by Sarah Ashley Jones 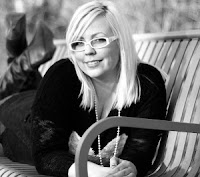 Promise Me This is her first novel and is a story that weaseled its way into her heart and wouldn't leave her alone until she typed it up on the computer. She already is hard at work on ideas for her next book and hopes that the
characters never stop coming to her. Her huge imagination was always in overdrive as a child and now she is beyond excited to put it to good use as an adult. She plans to write as long as she has stories that need to be told.

YOU CAN FIND PROMISE ME THIS ON
AMAZON | NOOK |  GOODREADS

HERE'S A LITTLE TEASER JUST FOR YOU

“Is there something on my face?” I asked, mid-wipe.
“You’ve got a little…frosting…” He chuckled as he brought his hand up to my cheek and ran the gentle pad of his thumb over my now parted lips.  He inspected his work and frowned.  “I don’t think I got it all…” His voice was a low growl as he leaned in and kissed the corner of my lips; trailing feathery kisses at a teasingly slow place down to the center of my bottom lip, before sucking it all the way into his mouth.  He nibbled on it softly while he tangled his hand into my hair and deepened the kiss. I was leaning into him, craving more of his touch with each second that passed.
Jhett brought his other hand up to my cheek, cupped my face with both hands, and broke the kiss.  I let out an unexpected whimper as he drew my forehead in to his.  “Any more of that, and we won’t make it to the rest of your birthday presents,” he said between breaths.
I sat back and folded my hands into my lap.  “Well, if we get to do that again as one of them, I’m all about it,” I smirked at him.


Enter to win a signed copy of Promise Me This by Sarah Ashley Jones below!
Open to international readers as well as USA.
a Rafflecopter giveaway
Posted by Christina @ Biblio Thoughts at 12:35 PM