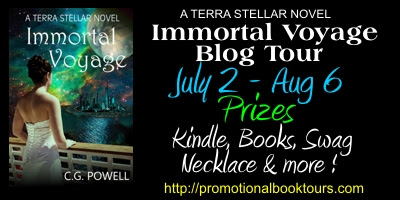 BUY ON KINDLE
A week passed and Jael was on a large ship headed to Hy-Brasil to meet her future husband.  She was nervous about the meeting, and after many talks with her father, she knew regardless of her feelings for Sarik she would marry him for the clan.
Once the ship left dock, Salima told Jael her image was not her true form.  Before Jael’s eyes, Salima changed.  Her skin turned blue as the sky and her eyes looked more cat-like than human.  Instead of the shock Salima expected, Jael asked if she could conjure fire.  In a single motion, a ball of fire appeared in Salima’s hand.  She moved it back and forth between her fingers before out stretching her arm over the side of the boat and allowing the fire to roll into the water.  Jael’s eyes widened in amazement.
The ship moved swiftly across the sea.  Its black sails shimmered with tiny strands of gold woven throughout the oddly slick fabric. When Jael inquired, she was told it was a solar sail, and although Salima explained how it worked, most of what she said was as foreign as Hy-Brasil itself.
As the boat approached the island, Jael looked out over the rail taking in the magnificence.  The city was beautiful and unlike any she had ever seen. It was made of concentric rings of land that surrounded the harbor.  Plants, flowers, and trees covered every inch, including many of the houses, and in the center of the rings sat a massive city of metal and glass that was beautiful beyond belief.  Moments later the ship laid anchor in the harbor of Atlantis, the capital city of Hy-Brasil.
A delegation from King Varen was waiting for them at the dock.  Most of the people were older men, advisers to the King, but one stood out among them.  He couldn’t have been more than five years older than Jael.  He was tall with raven hair and eyes bluer than the sea.  He was the most handsome creature Jael ever set eyes on.  He noticed her stare and smiled.  Jael lowered her eyes and blushed.  It was unladylike to look at a man that way, especially while on her way to meet her future husband… but, the gods be damned, this man had gotten to her already.
He walked over, kneeled down, and kissed her hand.
“Welcome to Hy-Brasil, Lady Jael.  I hope you will decide stay with us.”
His eyes looked into hers and Jael lost herself in them.  Her heart raced as a shiver went down her spine.  Jael had to remember her place.  She pulled her hand away reluctantly.  If she would be future queen, this type of behavior was not acceptable.  She addressed the man in front of her.  “Where I come from it is treason to be so bold to a lady betrothed, especially one betrothed to one’s prince,” she retorted, almost ashamed of his behavior, and yet, she could not forget the feeling of his touch.
“Then I should introduce myself.”  Standing up inches from her face, he said, “I’m Prince Sarik.  Sorry to have startled you, my lady.”  He nodded his head in a slight bow.
Posted by Christina @ Biblio Thoughts at 12:01 AM