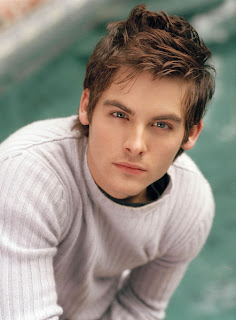 Kevin Zegers is playing the part of Alec Lightwood in 'City of Bones'!

So yes, thank goodness, finally, all the paperwork is signed and I can tell you that YES IN FACT, YES ACTUALLY Alec is going to be Kevin Zegers.

So in fact the gossip sites got it right but at the time there was no signed paperwork and he wasn’t actually cast yet so — there wasn’t anything I could say. Especially after we already had one Alec and lost him. So really I’ve been ripping out my hair since then. I think there are just pieces left.

Kevin was actually one of the first actors approached to play Alec but his schedule didn’t work with the filming originally so they went with someone else; then the scheduling changed once again and it didn’t work for Alec Mark Two, but did work for Kevin. Such are the vagaries of casting.

I’ve always liked Kevin, since Transamerica, and I had him on my website for Sebastian for ages which is funny in retrospect because now I’ve seen him play Alec so I think he’s much too nice for Sebastian.

One of the things I really liked about Kevin was that one of Alec’s audition scenes was the scene where Alec shouts at Clary in City of Bones and tells her she endangered Jace’s life. And a lot of the actors who auditioned played it yelling and really mean so you just thought, boy, Alec. What a jerk that guy is. Kevin played it with a quiet sort of intensity that grew through the scene so you could see through the cracks of the anger and think: wow, this guy is really scared and vulnerable. Because that is the Alec people love.

Also he will not have to wear contacts to get Alec’s baby blues because he already has them. Which is just a fortunate plus.