I'd like to thank Roxanne @ Bewitching Book Tours for giving me this opportunity to participate in the DREAM VISIONS Blog Tour. 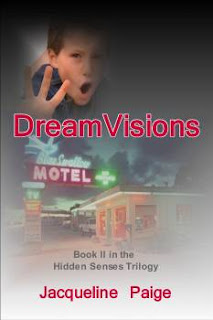 Felicity has spent her life alone, moving from one place to another hiding a part of her no one has ever been able to accept, not even her own family.
For as long as she can remember she’s had dreams that lead her to a person that’s somehow connected with her.  There are no answers or cures only misery for her when she can’t get anyone to believe her.
When a child reaches out to her, frightened and in the hands of strangers she forgets the reasons why she shouldn’t tell anyone and goes to the police.  She finds herself sent for a court ordered psychiatric evaluation.
It’s not the first time, it won’t be the last.  She packs up once again, ready to move as soon as she’s done with another so called doctor.  From the moment she steps into the office everything changes and she finds nothing she expected.
Can the child be found before it’s too late or is she facing heartache again?

Sitting on the tiny bed, hugging his knees as tightly as he could against his chest, his eyes darted around the room. It was so dark and so quiet here--he just wanted to go home and see his mom. Someone would come. Someone always did in the movies...
A creaking noise made him gasp, he quickly looked towards the door. Pushing himself back further into the musty corner, he watched and listened.
When it creaked again, he grabbed the thin blanket and dropped to lie down on the bed, squeezing his still damp eyes closed tightly.

Felicity blinked a few times and looked down. She was standing at her kitchen counter, hands grasping the edge so hard her knuckles were white. Sighing, pushing the straying blonde hairs away from her face her hand vibrating.
Closing her eyes, she took a calming breath. “I wished you would show me where sweetheart.” Whispering out loud made her feel better, even knowing he would never hear her.
Rinsing her hands under the cool water, she patted some against her sweaty brow. Drying them quickly, she looked around for a moment trying to recall what she’d been doing before the vision blocked out the rest of the world.
The kettle began to whistle, startling her. Unplugging it, she shook her head. It could have been worse, you might have been cutting vegetables or something else that could result in coming out of it injured.
If there was one thing she was thankful for it was, that when it happened her body froze-- and the usually prevented her too many serious injuries. Of course, it made life more complicated when it came to things like being in public or driving, both of which she tried to avoid.
Taking the cup of tea, she went over to the desk and pulled the tattered notebook from the drawer. Wanting to record every detail before she forgot any of it, she began jotting it down. Taking her time, she wrote carefully, making sure she described every little thing, even going as far as the crunching sound the old rusty cot frame made as the little boy moved.
Closing the book, she glanced at the stack of sketches briefly before she returned the book to the drawer and closed it. 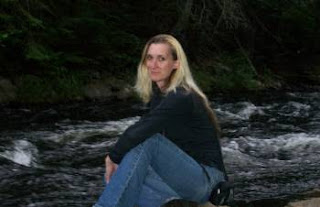 Jacqueline Paige is a world class multi-tasker being a mother to five adventurous and unpredictable children, a cafe manager and having a colossal imagination that allows her to step outside of reality into a world of paranormal romance —with just a touch of suspense.

Jacqueline lives in Ontario, Canada and avoids the ever changing weather of the region she lives in by creating other worlds to fall into in her stories of all things paranormal.

Her first book was published in 2009 and since then has published ten. She is always writing and currently has more than a dozen stories in one stage or another of the writing process.

You can find all of Jacqueline’s books at: www.jacqpaige.webs.com
Posted by Christina @ Biblio Thoughts at 12:01 AM