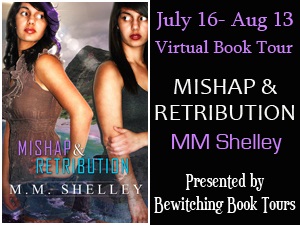 I'd like to thank Roxanne @ Bewitching Book Tours for giving me this opportunity to participate in the MISHAP AND RETRIBUTION Blog Tour. And I'd like to welcome M.M. Shelley to ABTB! There's is an individual GIVEAWAY at the end of the post for and E-COPY of Mishap and Retribution. Also there is a TOUR WIDE GIVEAWAY for 5 paperback copies and the grand prize is a Kindle touch. Be sure to thank M.M.! 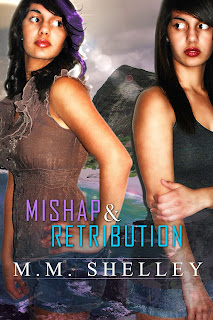 
At the Dawn of Time a curse against Man was made and only Death will satisfy it.

The year is 2045 and twins Grasiella and Tatiana who are Cinerian, Fae and Human must choose a side and may find themselves on different sides of an ancient war.

With Tatiana trapped in the Fae realm and learning what life has been like, she has found herself bonding with the Fae. Grasiella seeking the whereabouts of her twin has come to a crossroads of her own.

Separated and neither knowing the fate of the other, each make their way to an uncertain future.

Death has swept across the Hawaiian Islands and the cost of peace may be too high.

Grasiella kept a safe distance between herself and Missy as she followed her through the thick jungle of the Big Island of Hawaii. Missy was keeping something from her; she could feel it and Grasiella had to know what it was. It was not an easy task to locate Missy or to follow her, Missy was fast and she seemed to fly from tree to tree. She suddenly vaulted onto the ground only to run like a gazelle around the trees and brush. Grasiella had never needed to work so hard at trying to stay concealed; she had experienced a close call the first time that Missy had come crashing to the earth from her high perch in the trees.
Earlier in the day Missy had agreed to meet with Grasiella after receiving a gnome who had carried the message. Grasiella had needed to swipe a strand of hair from Missy without her realizing what she was doing; she had used the strand of hair for a tracking charm. It was the only way that Grasiella was able to keep up with Missy; if not for the charm she would have lost her miles back.
Over the course of the last few weeks Grasiella’s skills at charms had improved, it was a skill she had never thought to use for anything other than her own amusement. Now she had no choice but to use her magic as a way of discovering the secrets that everyone on the islands seemed to be carrying around with them. Those secrets were pivotal to her and her twin sister Tatiana’s survival.
Missy came to a stop at the base of the Kohala Mountains her body tensed as she stood unmoving. Grasiella used the trunk of a tree to block herself from view and peeked out to watch carefully. It seemed as if the air had become still and the noises of the jungle had come to a halt as she anxiously waited to see what Missy would do next.
Missy’s head rolled to the right, her right arm rose level with her shoulder until it suddenly shot skyward stretching up, her palm opened filling with the light from the sun. Ever so slowly her head rolled to the left and she repeated the movements on the left side of her body. Very slowly her arms began to drop until they rested at her sides and as they dropped a piece of the mountain shifted ever so slightly to the left. Missy kicked out with her left leg jumped into the air and landed on her hands in a handstand position her back to the Kohala Mountains. Her right leg bent backwards and very slowly she touched the mountain with her foot.
Another piece of the mountain shifted aside this time it revealed an opening in the shape of a trillion. Missy pushed against the ground with her hands, swung back around until she was on her feet and strode into the mountain, sealing it shut behind her.

CHECK OUT THE FIRST TWO BOOKS IN THE SERIES 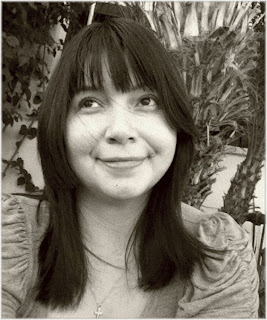 M.M. Shelley is a storyteller, word smith and dreamer. She has traveled the world extensively in search of the magic which is often overlooked in every day life. M.M. Shelley is a native of southern California, and a student of mythology from which she gets much inspiration.


HI Everyone, I’m M.M. Shelley and I would like to thank Christina for having me as a guest today. I would like to share an interview with Kana’i Wailele from Mishap and Retribution.
So please pour yourself a cup of your favorite Latte and if you’re at work, hang up your “On Break” shingle as we take five with Kana’i.

What is your full name?
Kana’i Wailele

What is the Hawaiian meaning of your name?
My grandmother Pele named me. Kana’i stands for conqueror and Wailele means waterfall. Water has a strong meaning in my family; it stands for power and control.

When did you first learn about magic?
My grandmother Pele, she took great interest in my training and saw to it that I had my training on the largest of all her islands: the Big Island. My family draws its power from the fire within the islands and the water that helped shaped them.

How do you like having Pele as your grandmother?
She’s more like a teacher than a grandmother. She likes order and if she doesn’t have it there is hell to pay. As her grandson, I feel that I have to be a certain way and I don’t have the freedom that my cousin Kye has.

What kind of school do you go to? Do they teach magic?
I didn’t go to a normal school, I guess you could say that I was home schooled.

Having lived in Hawaii all of your life, is there any place you would like to see?
After the summer I’ve had I would like to do some traveling with Grasiella.

What is your favorite pastime?
I enjoy working, but I guess that doesn’t count as a pastime. I like to drive around the islands and if I have Grasiella with me what else could I want?