I'm not even going to lie to you. Writing the third book was fun!! It's probably my favorite one out of the series so far, because the characters' powers have evolved and. . .I'm continuing to grow as a writer.

Writing has become a second skin for me now, and walking through the Santeria Habitat is like visiting home.

Check out the cover, blurb, and enter the giveaway to win a $30 Amazon Gift Card! 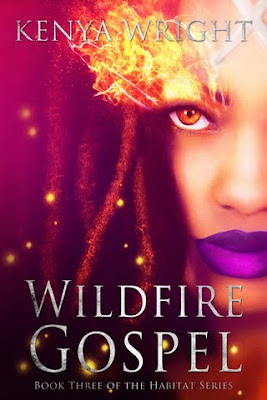 #1- Set Dante on fire until he’s nothing but smoke and ash.

#2- Find Nona and Mother Earth, tie them to a tree, and create the biggest bonfire Santeria has ever seen.

#3- Find out if there is anybody higher in Mother Earth's psychotic chain of command.

#4- Burn anybody else to a crisp if they get in my fucking way.

Lanore destroys her old beliefs of nonviolence. Flames of revenge now fuel her movements forward. Too many of her loved ones have died and she's done shedding tears. Sadly, she can't boil Dante's blood just yet. He has the resources to help Zulu and her. And they really need them. Discovering Mother Earth's whereabouts is difficult to say the least. She's not what they thought she was. She's something more.

Meanwhile, Lanore's father is missing. Normally, that wouldn't trigger her to stress, but there's been whispers spreading around the habitat like a wildfire. People have spotted a Demon with feline eyes and fire spotted cheetah skin, one that appeared at the Masquerade Ball right after MeShack was killed. She's hoping Graham will have some answers.

Is this Demon a coincidence or nothing at all? Is she's just grasping at a last bit of hope that somehow MeShack is alive or should she face the truth of his death?