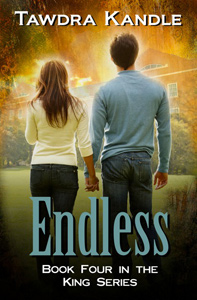 After the tumult of her high school senior year, all is right in Tasmyn Vaughan’s world. She’s attending college with her boyfriend, and she’s learning to control her powers. Everything is finally perfect, until it isn’t.

When her new part-time job leads to more than she bargained for, Tasmyn is thrown into a deadly fight against forces of evil that she didn’t even know existed. Mastering her extraordinary gifts—along with the strength of an endless love—may be the only weapon that can guarantee her a happily ever after.


Check out the entire King Series: 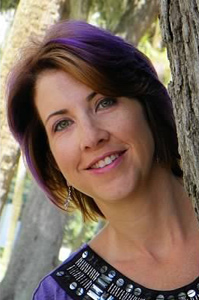 Tawdra Kandle is the author of THE KING SERIES, a young adult urban fantasy quartet. Born in South Jersey, Tawdra published her first short story at the age of 13 in Child’s Life magazine. During the early years of her marriage and motherhood, she wrote articles and columns on parenting and homeschooling, as well as some homeschooling curriculum. THE KING SERIES is her first published full-length fiction. Tawdra currently lives in central Florida with her husband, and children, both skin and fur types. And yes, she has purple hair.

Michael rubbed my back.  “Don’t worry about it. Once you’re finished this part of your training, you won’t need to be up at Harper Creek as much, right? And mid-terms will be over next week.”  He threaded his fingers through my hair.  “We’ll make it. We’ve been through worse.”
For a moment I thought he was talking about Rafe and Marica. Then he slid his hands around my neck, tracing the scars that were only just visible on my throat.  I closed my eyes again, this time sinking not into sleep but into Michael’s memories. I saw again his view of Nell sliding the athame along my skin, the blood—my blood—dropping into the bowl she held. I shuddered.
“The Harvest Moon Dance is tonight, back in King,” he murmured. “Two years ago. Can you believe it?”
“How on earth did you know that?” I asked, amused. All of our friends had graduated in either Michael’s class or in my own, and we didn’t really know anyone still in high school.
“Didn’t you get Amber’s email? She sent it to both of us, to say thank you again for saving her life that night.”
“I haven’t had time to look at email today,” I replied. “That was sweet of her. I’ll give her a call this weekend.”  I covered his hands, still at my neck, with my own. “That was the beginning of our friendship with Amber. The beginning of the end for Nell, I guess.”
“Maybe.” Michael clasped my hands, drawing them up and around his own neck. “Or maybe her story still has a few chapters left.” He smiled, shaking his head. “When I remember her holding that knife to you, a few weeks after the dance. . .I wouldn’t have cared if she were put away forever. But then she saved you. So I guess if she ended up having a decent postscript, that would be okay with me.” He bent his head to mine, brushing the lightest kiss over my lips.
Posted by Christina @ Biblio Thoughts at 12:00 AM