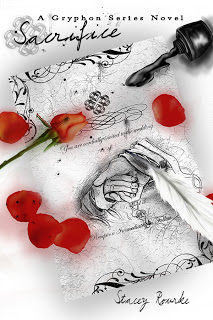 
Celeste Garrett has finally found a happy balance in her life as the Chosen One, thanks in large part to a certain hunky Irishman. But if there’s any lesson she should heed since receiving her calling it’s that everything can change in the blink of an eye. Soon a terrible new threat, unlike anything she’s ever encountered, causes her to make a gut-wrenching choice that will strip her of someone she holds dear.

As much as she’d like to have a pity party for one, there’s no time for that now because wedding bells are ringing in Gainesboro! In between dress fittings and rehearsal dinners Celeste will have to fend off attacking demons and leering pirates. As if the Dark Army wasn’t scary enough our heroine is faced with the horrifying trauma of attending a bachelorette party with her mom and watching Grams do Jello shots. Is a walk down the aisle even possible for a member of the Garrett family when the Dark Army is out to destroy them? More importantly, will the Dark Army Glee Club sing at the reception?

Raise your glass to the happy couple, and get ready for a wedding…Conduit-style.

All you have to do to enter to win each week is sign up using the entry form on the left sidebar.

An Excerpt from the Book!

My fists connected with the punching bag in time to the commands.

“Right hook. Left hook. No!” Bernard pointed his cane and electricity jolted through me. My muscles seized up, the world swam out of focus, and I could taste metal. “You’re being lazy! Again. Left hook.”

I used to have an irrational fear of garden gnomes. Then I met one. Turns out it wasn’t so irrational. They’re evil little jerks. Okay, that’s generalizing. Maybe it wasn’t all gnomes, just Bernard. In his defense, we didn’t really start our relationship off on the right foot. I have what you may refer to as “gnome-phobia”. They creep me right out. Therefore, when one walked into my bedroom after being introduced as my Spirit Guide, I had a slight case of the wiggens—by which I mean I screamed my fool head off and whipped every piece of my bedding and my sister’s at him. The low point came the moment I picked up my sister’s stuffed zebra. The second it went airborne things seemed to happen in slow motion.

Bernard got knocked clear across the hall when the dopey, grinning zebra walloped him.

In retrospect it probably wasn’t the best way to meet my new mentor. No wonder he got slaphappy with his zappy cane during our training sessions.

With still blurred vision, I swung blindly at the punching bag, missed, spun myself around and landed on the ground tangled in my own legs.

Bernard shuffled over, his cane clicking across the cement floor. Red pointed hat, long white beard, green shirt belted around his paunchy mid-section, and tan pants tucked into tiny little leather boots. Somewhere there was a flower bed with a Bernard-sized hole in it. He leaned against his cane and eyed me with contempt as he crammed one pudgy little hand into the satchel that hung around his waist. Extracting a handful of berries, he popped them into his mouth one after the other. They were fermented. He had a bit of an addiction.

Blue juice dribbled down his white beard as he chomped. “You’re not even trying. Such lack of effort by the Conduit is disgraceful.”

“Shouldn’t you be making cookies in a tree somewhere?” I grumbled under my breath.

“What was that?” He glared. The berries made him especially surly.

I tightened my ponytail and rose to my feet. “I said, ‘I’m sorry. Let’s go again’,” I lied with my best fake grin.

With a brisk nod, Bernard turned on his heel and marched back over to the perimeter of the musty garage. I fought the urge to quicken his trip by punting him there. Our training sessions normally took place at a clearing in the Appalachian Mountains, just outside of the tiny town of Gainesboro, Tennessee where we live. But a couple of weeks ago we got two feet of snow dumped on us. Grams didn’t want our warrior alter egos to get lax, so she transformed her one car garage into a training facility. It wasn’t much—a punching bag, space heater, and a small area the size of a mid-sized SUV for sparring—but it beat getting frost bitten toes.

I shook out my limbs and awaited Bernard’s next command. He banged his tiny cane against the floor to signal it was time to begin. I centered myself and let the power course through me. A smile curled my lips at the surging energy that electrified every muscle and joint of my body.

“Right jab.” Dust flew as my fist connected with its target.

“Left jab.” The bag rattled on its chain.

“Right hook.” Mid-swing a titter of laughter distracted me. Instead of hitting the bag, I caught it and steadied it.

“Remind me again why Kendall doesn’t have to train?” I stared daggers at my little sister. She sat huddled on the floor next to the space heater with Alaina, our ex-Spirit Guide.

At the mention of her name Keni’s head snapped up. Blonde hair, blue eyes, and the body of a dancer. Females everywhere would hate her if she weren’t a genuine sweetheart.

With a smile right out of a toothpaste commercial she beamed. “Because I don’t fight.” She leaned forward and let one ivory wing slide out of her back. Her feathers were impenetrable and had the ability to heal. A fact I relied on, and occasionally exploited, to keep me alive. “I protect.”

“Then why are you here?” I countered.

A flash of hurt shadowed her flawless features. “Moral support. So you don’t have to be out here in the dirty, dusty garage alone. Duh.”

“Conduit, back to work,” Bernard interjected.

I chose to ignore the angry little troll. “And swooning over bridal magazines is your idea of support?”

Alaina looked up guiltily. “That would be my fault.”

She pushed a wavy lock of auburn hair behind her ear. For a chick well over three hundred years old, she didn’t look a day over twenty-three. I assumed that—along with her pin-up model curves—is what drew my brother, Gabe, to her. Unfortunately, their relationship broke a lot of rules adhered to by The Council. (I have limited knowledge of them. To me they’re a group of snobs sent to make the lives of the warriors that fight for them miserable and they are astounding at that.) Because of her relationship with Gabe, Alaina got fired as our guide to all things mystical and her humanity was returned to her. She didn’t take this well. For weeks she wore nothing except her boyfriend’s sweats, refused to leave the couch, and ate ice cream by the gallon. I want to think it was love that prompted my brother to propose to her right around that time, and not his desire to get his sweetheart back into a regular bathing routine, but I can’t say for sure. Whatever his motivation, she said yes. He slipped that pretty little rock on her finger, her funk instantly vanished, and our house turned into Wedding Central.

Alaina flipped through the pages of her bridal magazine. “We’re searching for just the right dresses and I’m afraid it isn’t going well. Kendall agreed to loan me her knowledge of fashion to make sure everything turns out right.”

I cringed and smacked my head against the punching bag. “You’re gonna make me wear pink, aren’t you?”

“You don’t get to ugh.” Kendall jabbed a finger in my direction and her lower lip protruded slightly. “You have a date for the wedding. Ugh’s are reserved for those of us that have to go stag because our boyfriend hit a growth spurt, became the star of the lacrosse team, and cheated on us with that skank Sydney Taylor.”

I pushed off the bag, cocked my head to the side, and raised both eyebrows.

Keni’s face crumbled. “Fine, she’s not a skank. I’m sure she’s a lovely person. A lovely person that made out with Keith during the Homecoming game while I was on the 50 yard line being crowned Queen.”

I couldn’t help but chuckle. Part of my sister’s calling is a creature of love. All her powers and abilities are derived from the unlimited supply of warmth and goodness that bubbles through her. That makes it practically impossible for her to say anything mean or off color about anyone, even when she really wants to.

Our conversation was interrupted when an electric shock struck my left ankle and caused my leg to give out. I squealed and crumbled down on one knee.

“Conduit!” Bernard bellowed, his torturous cane still aimed my way. “Can you at least pretend that your calling is important to you? Perhaps attempt to take this seriously? Your lack of discipline is appalling.”

I ground my teeth together and tried to remember what my mom said about respecting elders. For the life of me I couldn’t recall it right then …

”We’re in the garage and I’m fighting a bag on a chain.” My nostrils flared and I fought to steady my breathing. “I’m sorry I don’t take that as seriously as you’d like. Put an actual demon in front of me and you wouldn’t doubt my dedication for a second.”

Bad time for the side door of the garage to open and my half-demon boyfriend to saunter in, trailed by my brother. Bernard’s jaw set and his bushy white eyebrows drew together. He never made any attempts to hide his distaste for my beau.

“Except for that one,” I tagged on. I tried to sound sorry. Really, I did. But the rush of adrenaline I got whenever I saw the raven-haired Irishman put an audible smile in my voice.

Caleb. Tall, dark, handsome, and all mine. We’d been together for a few months, but the swoon factor of his unbelievable hotness had yet to wear off. I sincerely doubted it ever would. Hints of blue reflected in his glossy ebony locks. He possessed the chiseled jaw of a Greek god, and a slight crook in his nose that added a flaw of humanity to his otherwise untouchable perfection. What he saw in me I had no idea. But all he had to do was give me “that look” and any intelligent thought I had was replaced with incoherent ramblings of humhna-humhna-humhna.

I rose to my feet. Everything and everyone disappeared around us. He walked toward me, the glint in those beautiful emerald eyes bordering on mischievous. His lips curled into a knowing grin as he slipped one hand around to the small of my back and pulled me in for a quick kiss.

Kendall noisily turned the pages of her magazine. “Hi, I’m Celeste. I have a boyfriend and I rub it in people’s faces even when I know they just got dumped.”

Reluctantly I pulled away from Caleb to glare at Keni. “First of all, that whiny voice sounds nothing like me. Secondly, you didn’t get dumped. He cheated on you. Big difference.”

For a moment she just stared. “Thank you so much for pointing that out. I feel much better now.”
Posted by Christina @ Biblio Thoughts at 12:43 PM