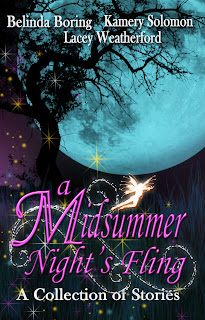 Aithne thought her dreams had come true when Hadrian, a Fae prince, stepped into her life and filled it with wonder . . . that was until her friend, William, declared his love, promising her more than mere moments. Three enchanted hearts . . . two honorable men . . . one important choice . . . an unforgettable Midsummer Night's Festival.

Raith has never been in love. In fact, he's spent his entire existence as the terror in mortal nightmares. When he enters Emilee's dream, he discovers that his powers do not work on her and she can see him as well. Being Fae he isn't allowed to show himself to a human, but there is something different about Emilee.

Bran has always wanted to try and see the Fae during Midsummer's Eve, when the Earth realm and Faery are blended. What he didn't count on was meeting a beautiful Fae princess who would turn his world completely upside down, wreaking havoc on both his life, his heart, and his future.

Join us September 12th from 10-6 pst. We will have tons of prizes, when I say tons, I really mean it. I do believe we will be playing a few rounds of a game I'm calling "Make Bels Swoon" It's going to totally rock.

We're also doing an awesome giveaway for a Kindle Fire!!!

Enter the rafflecopter below for your chance to win!
a Rafflecopter giveaway

Hope to see you all there!

Brought to you by the Release Day Diva
Posted by Christina @ Biblio Thoughts at 12:00 PM