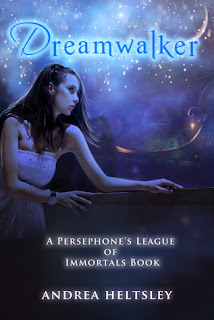 Summary: Noel Kennedy lost her boyfriend, her job and her dignity all in one week. Then something happened and she began to dream of this stranger she had never met. She couldn’t resist the man of her dreams named Jared especially when she met him in real life. Entranced, she slowly unraveled a world she was meant to stay out of. Her life was not what she thought it was once a sexy Boone stepped into the mix and shook things up. Can she escape a life of servitude or immortality for a chance at love?

Noel Kennedy's life changed once she began dreaming of a blond-haired, gray-eyed stranger who seemed familiar to her somehow. Things took a stranger turn when Noel saw the stranger in real life. But the stranger, Jared Townsend, wasn't the only one who found Noel. A danger very real and very unbelievable has found her too. With surprise revelations and long-lost memories surfacing, Noel must come to terms with not only her new reality, but also who she really is and a very uncertain future.

I didn't know what to expect from Dreamwalker, and I'm glad that I was pleasantly surprised by what I found. In Dreamwalker, Persephone is portrayed as the villain and not the victim, which is how she's usually described in stories featuring her. Persephone's League of Immortals is a group of slaves to those immortals that serve Persephone in exchange for that immortality. Then there is the rogue group that fights against PLI to keep their freedom and mortality, and protects others from being victimized and enslaved by PLI. It's all kind of confusing at first, but as Noel learns about this world, we learn along with her. So it gets better as the story progresses.

Noel's power is that of a dream walker, a clairvoyant who can enter dreams, have visions, and even see the future with training. She shares this power with Jared and Samara. The only reason her powers awoke was because Jared was sent to awaken them and performed a ritual to do so. For Noel, who is untrained, this ability can be very inconvenient--when a vision is coming upon her she suddenly nods off. I would have to say that the dreams that Noel has and enters are the most descriptive parts of Dreamwalker, besides the Underworld, though that is more like a nicely wrapped nightmare.

Noel and Samara have the ability to magnify each others powers. This would make them the most powerful clairvoyants in the world. They would be able to manipulate their visions and see the future in its entirety. This is the power of the Maristolla  family. Members of the Maristolla family are highly sought after because of their extremely powerful abilities. Noel and Samara's power is what makes Persephone want them as her new initiates. Like they say, with great power comes great responsibility. But it also comes with great sacrifice, as Noel and Samara know very well.

Now if you were caught between having to choose Jared or Boone, who would it be? Noel finds herself in this very situation. Her soul says Jared, but her heart and mind tell her Boone. At the beginning, I was all for Jared. He was the mysterious dream guy. But then Noel met Boone, who is very much in the now. He was there for her whenever she needed him, and because of his abilities as an empath, he really seemed to understand her. So by the time she had to choose one or the other, I was hoping that she would choose Boone. As for who she chose, you'll just have to read Dreamwalker to find out. And believe me, it's worth it. There are some really steamy scenes!

With the conclusion of Dreamwalker, I am extremely excited for the sequel, which comes out sometime in 2013. With all the uncertainties and questions left up in the air, I can't wait to find out what happens next.

I am a biology nerd who decided it was more fun writing than dissecting. I have written two novels and my third will be out this summer. I live on coffee and read like a robot. My husband and two italian greyhounds usually have to tear me away from the computer...imagine that. :).

Links to find/buy your book:


a Rafflecopter giveaway
Posted by Christina @ Biblio Thoughts at 12:02 AM