Return to Arethane (The Elves of Arethane #1)
by Kelly Riad

16-year old Emily has accepted her fate with each weakening beat of her heart, but after her best friend's brother and sister arrive in town and turn out to be more than what they appear, Emily's life is turned upside-down. When their friendship includes confronting wizards who harbor dark secrets and dancing with an elf prince, Emily discovers there are some things still worth living for.

Emily often wondered what it would be like to die. She didn’t have a morbid fascination, just a valid curiosity considering her bad heart and limited life. She didn’t expect to feel cold everywhere but her heart. For once the weak muscle inside her chest rested, the flesh above it heated like she stood before a fire in winter. She felt calm with no tremors or nausea, no dizziness, her breathing even.

Nothing but black filled her vision while she lay on something soft and cool, unable to move though she hadn’t really tried to yet. The warmth over her heart grew heavy. Weighted down, she felt as though the ground absorbed her.

I must be dead, she thought.

Slowly erasing the dark a soft heavenly light appeared above her until it formed a face staring down at her with brilliant, blue eyes.

She studied the face’s lips. She noticed how soft and smooth they looked; how much she liked their shape and the way the light glowing around them seemed to shine on their pale pink surface. She wanted to touch them.

Emily tested her arm to see if it could move at all in this realm of non-existence; it did and she raised her hand, pressing her fingertips against the lips. They were soft. They curled up at the corners, and she liked that shape even more.

Emily looked at the rest of the face and recognized it. Reality came crashing back. She became aware her heart was beating, she could now hear it thundering in her ears as she lay on the grass with trees surrounding her. A deep sky overrun with stars was starting to pale in the coming dawn, filling the space behind the face. Lifting her head, Emily looked down her body and saw Jarrad’s hand inside her shirt, pressed against her heart. She frowned.

“I’m not dead,” Emily said letting her head fall back.

Jarrad took her hand away from his mouth and held it. He shook his head and placed her hand against her chest where his had been. He pressed down on it.

Her eyes danced along the twisted tree branches as she concentrated; beneath her palm her heart drummed rhythmically at a tempo much slower than she had felt before, though still pounding after Jarrad’s touch. Still, there was no dizziness; she felt strong and alive.

She looked at Jarrad. “No,” she shook her head, unable to believe it. “Already?”

“Arèthane took to you,” he said, his voice soft.

A tear fell, melting into the hair at her temple. Smiling in a way she had never done before, she wrapped her arms around his neck, pulling him down on top of her, and hugged him tight. Eyes closed and fists balled, she held onto that moment for just a little longer and he held onto her.

Inhaling deeply, Jarrad helped Emily up, buttoning her shirt back once she was on her feet. “Still, I had to make sure,” he explained with a grin. 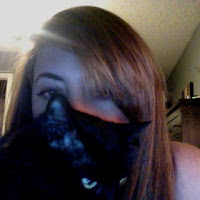 Kelly Riad is from Texas where she lived with her husband and a house overrun by pets. She now lives in the San Francisco Bay area and is determined to bring the y'all to the West Coast.  While she published her first book - a handmade pop-up titled "The Lost Puppy" - in the fifth grade to much acclaim by the first graders, she only recently picked the craft back up. "Return to Arèthane" is her second published novel.