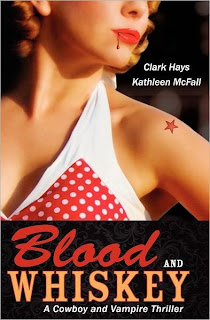 Relationships are always hard, but for a broke cowboy and a newly turned Vampire, true love may be lethal.

After barely surviving an undead apocalypse in The Cowboy and the Vampire, Tucker and Lizzie hightail it back to quirky LonePine, Wyoming (population 438), to start a family. But she’s got a growing thirst for blood and he’s realizing that mortality ain’t all it’s cracked up to be when your girlfriend may live forever. With a scheming Vampire nation hot on their boot heels and a price on her head, how far will Lizzie and Tucker go to protect their unlikely love?

What Character Most Prompted You To Write "Blood and Whiskey" and Keeps Your "Blood" Inspired?

Blood and Whiskey: Inspired by Paranoia

How one character, in particular, sets the tone for the blood- and romance-drenched second book in The Cowboy and Vampire Thriller Series.
Blood and Whiskey is an opposites-attract love story. It’s hard to get more opposite than the salt-of-the-earth cowboy, Tucker, who falls irreversibly, hat over heels in love with Lizzie, the queen of the undead. She’s nuts about him too, and she wasn’t always a vampire — when she met Tucker she was a big city girl who thought the handsome, undereducated stranger would make for a memorable drunken mistake.

A lot can change in a few months. Now they’re pregnant, for starters.

The book captures the magic and chaos of their very different worlds colliding in a love affair for the ages. Like any new lovers, they have plenty of stuff to work through. She favors martinis and piano bars; he likes camping. He flosses too loudly; she needs human blood to survive. And that’s just the easy stuff. They are also being pursued by vampire assassins, and the world of the night walkers is teetering on the edge of civil war which could spell disaster for the human race. Plenty of action, sizzling romance and dark humor swirl around them.

Lenny is Tucker’s best friend and a way-off-the-grid survivalist. He once designed weapons for the military, but exposure to hazardous chemicals and dark deeds in the name of national security earned him a medical discharge.

Lenny has never met a conspiracy theory he didn’t like, from Roswell to the JFK assassination, from black helicopters to cattle mutilators. He lives in a bunker in LonePine with his wife June surrounded by enough dried meals and stockpiled weapons to last through any apocalypse. Little did he know it would spill out of a musty coffin.
In The Cowboy and the Vampire, when the evil vampire hordes threaten Lizzie’s life, Tucker turns to Lenny for help. With weapons Lenny designed and some “wet work,” they survive the worst the undead could throw at them. In Blood and Whiskey, it’s Lenny who needs help. His niece Rose, an orphan and runaway, is kidnapped from the streets of Portland, Oregon, but not before she has time to make one panicked phone call to her uncle.
Lenny calls in his favor with Tucker and they drive to Portland, then on to a deranged meat packing plant in Plush where Rose is being held.

Along the way, Lenny:

And that’s just in the first third of the book. Things really heat up from there.

Lenny might not be one of the star-crossed main characters, and he may not be sexy or plagued by world-shaking issues of good and evil, but he knows the world “ain’t what it seems.” He always knew an Illuminati was pulling the strings, he just didn’t know the mysterious overlords were terminally allergic to sunlight.

While the love between Tucker and Lizzie anchors The Cowboy and Vampire Thriller Series, Lenny is the one who insisted this story to be told. Because Lenny knows that reality — when you look it straight in the eye and don’t flinch — is darker than we could ever dream and that humans are not at the top of the food chain.

About the books
Blood and Whiskey (Pumpjack Press, May 2012), by Kathleen McFall and Clark Hays, is the second book in the Cowboy and Vampire Thriller Series. It’s a wickedly funny tale of love, loyalty and sacrifice in the modern west.

Clark Hays grew up in Montana in the shadow of the Tobacco Root Mountains. In addition to his fiction work, he is a cowboy, a published poet and occasional food critic. Recently, he was nominated for Pushcart Prize for short fiction and not so recently for a Rhysling award for poetry. Clark brings a deep knowledge about the modern west, weaponry, country music and existentialism to his writing.

Kathleen McFall grew up in the heart of Washington, D.C. She worked as a petroleum geologist and, later, as a journalist, and has published hundreds of articles about scientific research, energy and natural resources. An interest in the overlap of science and mysticism are an essential aspect of her fiction writing. She received an Oregon Literary Arts Fellowship for fiction writing.

Lizzie, Elita and the rest of the gang are back for blood in the second book of Hays and McFall’s (The Cowboy and the Vampire, 2010) series.

Following the climactic events of the first book, Lizzie Vaughan doesn’t get much of a breather. When a friend’s niece disappears, her Adamite (read: full-blooded human) boyfriend, Tucker, is still coming to terms with the fact that his woman is a vampire. While he leaves town to investigate, Lizzie is having trouble resisting the urge to kill, as the baby she carries—the one no one thought was possible—makes her hunger unbearable. Meanwhile, powerful elders are arriving in the western town of LonePine to decide if the prophecy has come true. Is Lizzie really their new queen, the one who can save vampirekind—or at least their own Messianic bloodline? Introducing racial issues isn’t the only adjustment the authors have made to the vampire mythos, but it’s more than just the details that set this series apart. Rather, it’s the way the authors utilize those details to create meaningful conflicts and world-altering choices for the characters. While a number of existentialist underpinnings give the series some depth, the book is first and foremost a thriller, upping the ante in every chapter as bullets fly and relationships strain under the weight of old loyalties and new revelations. In a way, it’s a shame more time isn’t spent exploring the existence of this meta world where consciousnesses wait out the daylight hours and immortality has all sorts of ramifications for human spirituality. But with strong writing, funny characters (no irony is lost on one vampiress who takes to sporting a “Future Farmers of America” jacket) and plenty of action, it’s hard to fault the authors for keeping the focus on a story this riveting.

Those who missed out on the first book will really have to hang on if they want to follow what’s happening, but it’s worth it for this tale of love and blood in the modern West.  Kirkus Reviews
Posted by Christina @ Biblio Thoughts at 12:00 AM