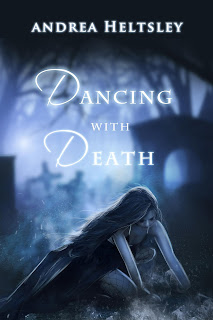 Tagline(s): Death is coming and he's coming for me.

Summary: Murders have plagued the woods in the past, making them a place of fear. Eighteen year old Wendy and her friends become worried when a new string of murders come to their high school. After a horrible car accident, Wendy returns to school, going from wallflower to popular overnight. As the murderer edges closer to Wendy she realizes things are changing. She is afflicted with nightmares that are all too real and she herself is undergoing unnatural changes. Learning the truth about her past, could be the key to saving her future.

In Dancing with Death, Wendy is a senior in high school, living in a town plagued by murder after murder. The "Witchy Woods" where the murders took place is a place of fear, so when Wendy is hit by an oncoming car on a road alongside the woods, left in the ditch in her mangled car, she fears that that is how she will die. But before her car can explode she's saved by a stranger who pulls her out and takes her to the hospital. This car accident is only the beginning as Wendy's life changes forever.

There is a very good reason why I gave Dancing with Death only a 3.5. More than half of the book is just intense makeout scenes and finding the perfect outfit. I started to wonder if that was all this story was going to be about. What saved this book was the strange nightmares and messages from beyond the grave. This piqued my curiosity enough to find out what was really going on. Don't get me wrong, I like action but not when all of it is in the romantic sense. The story really picked up when Wendy and Halle found the locked chest in the attic filled with her family's secrets. Then there were the multiple murder attempts against Wendy's life. Basically I'm saying that, even if they are small, I would have liked more events to add suspense and intrigue within the first half.

I definitely wasn't expecting Wendy's secret family history to be what it was, though.  I don't want to say too much about it since I want to leave that part for readers to find out, but I will say that she is a demon and the type of demon she is really explains the changes she undergoes. I thought the story would have had something to do with Death himself from looking at the title, Dancing with Death, but it really only refers to death itself.

I mentioned intense makeout scenes and, boy, are the INTENSE. Wendy finds herself with two guys vying for her attention--Brandt Summers, the new guy from California and Matt Geyer, the new school librarian. Maybe it's my bookish ways, but I loved Matt from the very beginning. Now that is perfect--a smokin' hot male librarian. But he's also genuine, loving, and respectful. I never really liked Brandt. That's all I can really say about him--I just didn't like him at all.

The conclusion was a little anti-climatic, but the question of whether Wendy will live to see the next year leaves me wanting for the next book, Dancing with Demons.

I am a biology nerd who decided it was more fun writing than dissecting. I have written two novels and my third will be out this summer. I live on coffee and read like a robot. My husband and two italian greyhounds usually have to tear me away from the computer...imagine that. :).