Tour: Rise of the Wadjet Witch: Written in the Sky by Juliet C. Obodo (Guest Post+Giveaway) 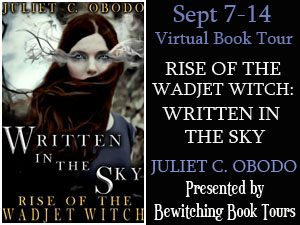 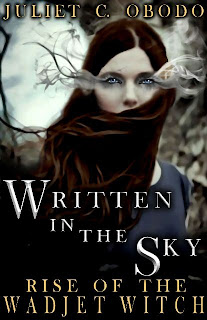 All future astronomer Memphis Holland wanted was to quit smoking. The pressure to complete her dissertation on Ophiuchus the lost astrological sign and receive her PhD in Astrophysics has been high. She visits a hypnotherapist to rid her of her cravings and instead is given the ability to see the future and to teleport. To anyone else this would be a wonderful trade, but she doesn’t see it that way. These strange new powers and the fact that there is a serial killer piercing women in their Third Eye chakras and leaving their bodies all over New York City has her highly stressed.

Yoga doesn’t help and neither does her new position at Sign of The Times, a New Age newspaper run by her best friend Jill. Her mysterious coworker Lawrence, the reporter covering the murders, puts her even more on edge. He is nothing but kind yet there is just something about him; he has this uncanny ability to know exactly what she’s thinking.

Her astrological predictions for the newspaper are well received. But the eerily accurate personal horoscopes that are sent to her by an anonymous astrogirl88 are not. As the secrets and predictions from astrogirl88 unfold Memphis is led down a dangerous path to find out who she really is and the unsettling truth that her destiny may have already been written for her.

She went upstairs and got her things. She checked her watch. It wasn’t even midnight. It was still early enough to take the subway instead of a cab. She looked for Jill to wish her goodnight, but spotted her white satin clad bottom seated on the knee of a guest.


The guy was looking at her with pure adoration. She had a sudden flash; of them sitting that way, but they were much older. He was The One. Memphis smiled to herself. She decided not to disturb them. But shot Jill a quick text just in case she looked for her later.


She was half way down Jill’s block when she heard footsteps behind her. She didn’t see anyone when she turned to look. She half jogged the rest of the way to the station. She made into the car right before the doors closed. She caught an express train and arrived at her stop in just a few minutes. The cold air felt good against her face as she stepped on to the sidewalk. The first few blocks of her route home were fine because they right on 86th Street and heavily populated. She just hated having to walk down the last quiet block. She couldn’t imagine living in the suburbs with no one around.

Her thoughts were interrupted by the sound of footsteps behind. It was probably a dog walker. She turned to look, but no one was there.

She continued walking, increasing her pace. Again, she heard footsteps.

She walked a little faster; the footsteps followed suit.

She started to jog; she could hear them getting closer.

She began running; so did the person behind her.

She was being chased!

Suddenly, she was on her sofa in her apartment.

“How the hell…” She saw that the door was wide open. She jumped up and slammed it shut. After turning all the locks, she slid down in front of it. She looked in the mirror, which was across the hallway from her. She was shaken and confused. She didn’t know who to be more afraid of, the person on the other side of the door or the person in the mirror. 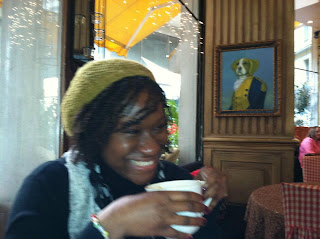 Juliet C. Obodo writes fantasy fiction and inspirational city guides. She loves both sci-fi and fantasy due to the fact that she has a short attention span and books in these genres are able to hold her attention for more than a chapter. She love novels that introduce a sci-fi or fantasy element in to the plot in a realistic or almost mundane way. Recently released favorites are The Magicians and The Discovery of Witches. They inspired her to finally put the stories in her mind on to paper. She is based in New York City, but travels out-of-state once a month and internationally every two months. She's constantly in search of the perfect cup of coffee and a coffee shop like Central Perk on Friends. Follow her on twitter @julietcobodo or visit her blog Traveling*Indie*Writer*Chick

The Magic of Writing

I’ve always been an avid reader but it wasn’t until about three years ago that I began to write. Short stories and essays were my way of expressing myself and releasing those random thoughts that always seemed to be floating around my head. I never considered actually writing a book until after I finished reading The Magicians by Lev Grossman. I wanted to create a world of my own and be able to share it with other readers; to me reading isn’t about the words or the prose. Good writing does facilitate in taking one to that special place, but it would be nothing without a good story or characters behind it. The characters don’t have to be loveable; personally I can read a book and hate each and every one of the characters. It’s wanting to happens to them after the book ends or what happens in the next book is where the magic lies.

When I began writing Rise of the Wadjet Witch I never intended it to be a series, but after I finished the last sentence, I knew this is only where Memphis’ journey began. She just discovered her powers, her real family and maybe true love. She has a great deal more to find out and there is much to be revealed. It’s wonderful when the characters take control of the plot instead of the author or even the audience, it’s pure and natural. The story weaves itself. This is why I’m able to go back and read Rise of the Wadjet Witch even though I penned it. The plot and the characters weren’t researched or structured before I began writing they seemed to form just as my words hit the computer screen or pen hit the paper.

I hope this comes across to the readers. This book was written by a reader first and an author second and lastly someone who believes in the magic and power of a good story.