Manga Review: End of the Chrysalis Age by Tite Kubo 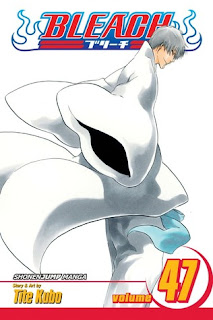 Tagline(s):  If you became a snake tomorrow
And began devouring people,
If you roared your love for me
With that mouth you use to devour people
Could I still say that I love you
As I do today?

Summary: Aizen's new powers are too much for even the combined efforts of Ichigo, Isshin, Urahara, and Yoruichi. But as Aizen and Gin head for the real Karakura Town, Ichigo decides to undergo intense training under his father's tutelage.

Matsumoto caught a glimpse of Gin while he was fighting Ichigo and took off running. Her feelings toward Gin are going to get her killed eventually. She was only healed enough to stay alive, and yet she's running after Gin. Not smart.

With Ichigo's lost hope, his strength diminishes. Gin states that Ichigo was a lot scarier when they first crossed swords after Gin cut off Jidanbo's arm when Ichigo first arrived in the Soul Society. This is true. Ichigo looks kind of pathetic now.

Just as Ichigo's Getsuga Tensho wounded Aizen's, so does Isshin's. But Isshin can't read Aizen's spirit energy since his transformation. Only someone in the same state would be able to. Of course, Ichigo can sense is power. And it's made even more real when Aizen takes out Isshin, Yoruichi, and Urahara. This is when Aizen prepares to open the Senkaimon Gate and invade the real Karakura Town in the Soul Society. It's also when Aizen's creepy shell--chrysalis stage--breaks apart and his transformation is complete. I have to admit, the new Aizen does look kinda cool.

"This towering world of yours that was filled to the heavens with hope has been reduced to your tiny little town! The rain that once poured down on this world may have stopped, but now it's been sunk to the bottom of the ocean! All because you lost hope and stopped moving forward. Ichigo, I will not let you stay like that. I will pull out the very roots of your despair."

This is when Ichigo meets the new form his Hollow power gained in his fight with Ulquiorra. Ichigo fears this form and that is the reason he can't Hollowfy properly. Tensa Zangetsu and the Hollow are one. They both are Ichigos power. And this--both of them merged together--is who Ichigo needs to battle to learnt he Final Getsuga Tensho. The two merged together look really awesome. I can't wait to see more of their fight against Ichigo.

As Aizen enters Karakura Town, Ichigo's friends begin waking up. They make a run for it as Aizen draws closer and closer, but will Ichigo make it in time to save them all?

His next series, Bleach, about a high school student who becomes a shinigami and fights hollows, was not such a failure. Bleach began regular publication in 2001. It has been running in Weekly Shonen Jump ever since.
Posted by Christina @ Biblio Thoughts at 3:34 PM