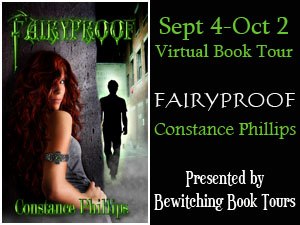 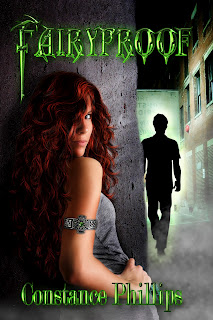 When Monique finds out her brother, Kieran, is planning her future with the one fairy she wants nothing to do with, she seeks refuge in the human world. Now Kieran fears she will be the next victim in a string of murdered fairies and is determined to bring her home.

Hiding should be a breeze. She can control any human with a flirtatious smile and an attraction spell. Until she meets Daniel Elliot, the only human who's immune to both.

A year ago, Daniel's fiancée disappeared with the engagement ring, an Elliot family heirloom. He's ready to move forward with his life, but his mother's obsession with retrieving the ring makes that impossible. Then Monique walks into his office to apply for a job.

Daniel and Monique can't deny their attraction, but will the reason he's Fairyproof be too much to overcome?

(This is the scene in which the hero and heroine meet. Monique is interviewing for a job, and has given a false name – Naomi – because she is in hiding.)

Two large windows overlooked the park across the street, a tell-tale sign of his success in the business world. The park looming ten stories below, a bit of nature captured between the high-rise office buildings, reminded Moni    que of the world she ran from. It was a slice of serenity amidst a chaotic city, and a dynamic illustration of the two worlds she was caught between.

A large, cherry desk with no clutter sat near one window. Other than a tray full of files in the left corner, only a computer monitor sat on the polished surface. In front of it were three reddish-brown leather chairs with cherry end tables separating them.

Both her father and brother used to say “focus on your strengths and downplay your weaknesses,” and that’s what needed to be done. Her best assets were physical: long legs, a small waist, and breasts that would always turn a man’s head, especially when she unbuttoned the top two buttons and wore a push up bra. Five-nine before slipping on the three-inch black heels, she towered over most women. The shoes matched a very short skirt and sleek-fitting jacket.

She shifted her weight, started across the room and focused on Daniel. Sitting behind the desk, his head was buried in a file. All she could see was his jet-black hair. Bone straight, it framed his face and brushed his shoulders with just enough gray at the temples to raise her pulse.

Then he looked up.

Gray eyes met hers from behind black-rimmed glasses. Her heart lurched in her chest. Charming him would be a pleasure.

Holding his gaze, she set her shoulders back enough that his eyes would drop lower, and closed the distance between them. She offered her hand across the desk and tipped her head, letting her hair fall across her right shoulder. When his large hand enveloped hers, she smiled and cast an enchantment spell. “Mr. Elliot, I’m Naomi Sanders.”

She waited for the familiar haze to cloud his eyes, a sure sign he was under her control.

He accepted her hand, cradled it in his for a brief moment before turning his attention to his assistant who handed him her paperwork.

No haze. He didn’t move toward her with an infatuated grin, just went about his business. A sharp pain seized her heart, radiating through her chest. What could have gone wrong? Casting an enchantment spell was second nature. She’d been using them to get what she wanted since seeking refuge among the humans.

As she lowered herself into one of the chairs, her mind grappled with what had gone wrong, and her body slipped into the familiar: teasing the man in front of her. She crossed her long legs, and let her skirt slide up her thigh.

Unaffected, Daniel read her file as he walked around his desk and leaned back against it. After a moment, he looked up and asked, “Why did you leave your last job?”

She shifted her weight in the chair, uncrossing her long legs and crossing them again in the opposite direction. He didn’t appear moved at all by her physical appearance, but even with her worries Monique couldn’t ignore him or the way his dark, tailored suit accented his long, lean body.

A smile crossed his thin lips, but not for the reason she wanted. He hadn’t even noticed her legs. Contact hadn’t been broken by his crisp, clear eyes. The grin turned to a light chuckle. “If that question is too hard, Miss Sanders, maybe we’re both wasting our time.”

Her cheeks flushed and she knew they were reddening with embarrassment. Worried they clashed with her hair, she tried to swallow the blush. If winning this job the old-fashioned way wasn’t going to work, then she wasn’t going to get it. Still, she had to say something. Fear knotted her stomach as she stammered, “It’s not too hard, Mr. Elliot. I needed a new start, so I moved.”

“From the locations of your last three jobs — Los Angeles, Pittsburgh, and Boston — it seems like you’ve needed a few new starts. Now, it’s Elgin, Illinois. Some would say moving across country when you don’t have a job lined up is a very stupid thing to do.”

A glint in his eyes that told her he didn’t agree with that statement. She followed that instinct and moved forward, hoping to salvage things. “I’m not worried. If I don’t get this job, I’ll find another.”

If he was immune to her spells, was she also transparent to him? Did he know she was lying? Could he see just how desperate she was? Her fears raced through her head, breaking her concentration.

“I would say you’re brave and a go-getter.”

Wait. Those were positive attributes. Right?

He tapped the pen on the edge of his desk, studying her file. “On the other hand, I’m worried wanderlust might strike again. The reason there is an opening at all is because Renee’s new husband’s job is taking them both out of state. I don’t want to have to go through a search like this again in six months when you decide you need another change.”

She’d be lucky if she was still here in six weeks, but she couldn’t tell Daniel that. The fact she had to tell him anything at all annoyed her. Her prowess and powers should have had this job cinched by now. He should be sending the other girls home and inviting her to lunch.

But she couldn’t let her frustration derail her. This job was too important to her survival to let it slip away. She dug deep, reached out and touched his knee so she could cast the spell again. Smiling in his direction, she said, “If you give me the chance, I won’t disappoint you.”

He shifted to his right and let her hand slip away as his eyes returned to the file. His lower lip curled between his teeth as he studied her application, not dissuaded from the task at hand. He didn’t even seem to recognize the subtle inflection in her voice.

Instead, he was going on and on with legitimate questions about her employment history and her knowledge of the business world. Could she work weekends if asked? Was she familiar with the software their computers used? Did she have experience with multi-line phones? Did she consider herself a people person?

Some she answered honestly. Others she flubbed her way through, making up the best answers she could. Unfortunately, thinking on her feet was not what she considered a strong suit and she was having a hard time deciphering how Daniel was reacting to her. It just wasn’t happening the way she’d hoped.

Her toe tapped against the floor, but deep inside her heart quivered. His cool, detached attitude challenged her, but if she didn’t impress with this interview, she’d never get the chance to know if she’d overcome his immunity to her.

“Well, thank you for coming in, Naomi. I have a few other women to interview, but I need to make a decision soon. You’ll be hearing from me either way.”

It was over. For the first time since leaving her own world and stepping into the humans’, she’d failed. She hadn’t charmed Daniel and she wouldn’t be getting this desperately-needed job.

Stepping into the small elevator, she watched the metal doors close and asked her mirrored reflection what’d gone wrong. Humans weren’t immune to her power — their power — it just didn’t happen.  Did it?

Keiran considered all humans the enemy and he knew his enemy well. He would know what was going on here, but, since they weren’t even on speaking terms, she couldn’t ask. He’d be more concerned with getting her far away from them and back home than teaching her more about their ways. She wasn’t willing to surrender to him. And she wasn’t going home.

Of all times for her powers to fail! And it wasn’t just about how much she needed the job. As important as it was, her desire to see Daniel again burned inside her and it went so much deeper than his grey eyes and lean frame. Deeper than his delightful smile.

For some reason, his immunity to her spells and wiles intrigued her. She hungered for what lingered just out for reach like some forbidden fruit.

Without the job, she’d never see him again and the fact he appeared to be spell-proof would no longer be significant.

But what if it was a failing with her instead of a resistance in him?

In some ways, the thought made sense. It also terrified her. She’d always survived here by keeping humans, especially the men, on puppet strings that she controlled. If she had to deal with them on a level playing field, she was doomed.

Without this job, she was more vulnerable to her brother and Eero. Would Daniel Elliot, with his charm and good looks, be the one to end her earthly romp and cause her to go home?

Damn it! Didn’t he know he was supposed to find her irresistible? After all, she was a fairy. Constance Phillips lives in Ohio with her husband, two ready-to-leave-the-nest children, and four canine kids. Her perfect fantasy vacation would involve hunting Dracula across Europe with her daughter, who also digs that kind of stuff. When she's not writing about fairies, shifters, vamps, and guardian angels, she's working side-by-side with her husband in their hardwood flooring business.

Constance is actively involved in her local Romance Writers of America chapter (MVRWA) and the Southeast Michigan chapter of the United States Pony Club. When not writing or enjoying the outdoors, she loves reality television or can be found at a Rick Springfield concert (just look for the pink Converse high tops).

GIVEAWAY:
Amazon Gift Card and one Fairy Door
Open to US Shipping 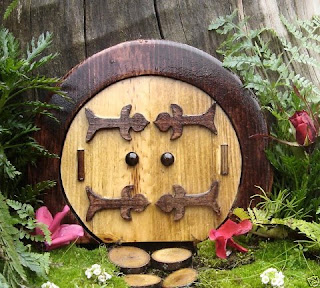