The Power of Rock compels you!

It's no secret that anime has given us some majorly memorable music, but what about those shows that focus on the bands themselves? Today is their day in the limelight; or in the words of AC/DC, "For those who are about to rock, we salute you" (and our five favorite fictional bands).

BECK (BECK: Mongolian Chop Squad) - Don't let the title fool you; this isn't Genghis Khan's personal karate-using death squad. Rather, it focuses on two teenage slackers turned rock stars. The trials and tribulations of a rock band always make for a good story line (we're looking at you, Spinal Tap), and BECK is no exception. Following the group through success, a break-up, a rough reconciliation and another eventual success, the boys of BECK prove both interesting to watch and easy to rock out to!

Girls Dead Monster (Angel Beats!) - Girls Dead Monster doesn't really play your normal gigs – given the fact that they’re dead and all, for starters. The band also serves as a distraction during battles against God, so…again, not your normal rock group. But when you go to a high school that serves as purgatory for the dead, this is probably par for the course.

Black Stones (Nana) - Love, heartbreak, competition – these are all the makings of great band story, no? The punk rockers of Nana’s Black Stones (which eventually feature one of the title characters) fight hard for the recognition they deserve and blow the roof off every gig on their way to fame. If you need us, we'll be in the mosh pit.

Fire Bomber (Macross 7) - There are few fictional bands more epic than Fire Bomber. They dress like they're straight out of Mad Max and rock harder than Lord Humongous. Since the anime began, Fire Bomber has released more than a dozen albums – quite the repertoire for an animated band. Your move, Gorillaz. 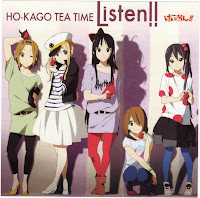 Houkago Tea Time (K-ON!) - There’s nothing quite like an all-girl rock group. Even Stormtroopers like them! We're not sure what Sakura High's definition of "light music" is, but the ladies of Houkago Tea Time are playing neither chamber music nor Michael McDonald covers; they're rocking out. With an adorable ensemble and crazy-catchy riffs, these girls are the best musicians to don a school uniform since AC/DC.
Posted by Christina @ Biblio Thoughts at 12:00 AM