Manga Review: Back from Blind by Tite Kubo 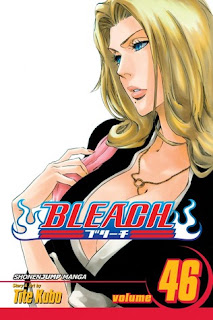 Tagline(s):  It is not frightening
To know misfortune
What is frightening
Is to know lost happiness
Will never come back again.

Summary: With Captain General Yamamoto giving him an opening, Ichigo goes in for the finishing strike against Aizen! But Ichigo will need the help of some new reinforcements if he hopes to defeat both Aizen and Ichimaru Gin!

Yamamoto uses a forbidden technique that can only be used by sacrificing the users body, but unfortunately Aizen only gets singed a little. But Yamamoto's sacrifice left an opening for Ichigo to launch another surprise attack. Finally Aizen receives a wound! The only problem is that the Hogyoku healed him.

This arc seems like it's going to go on forever. Would someone just kill Aizen already so the story can progress? All of this ATTACK-MISS, ATTACK-HEAL, ATTACK-OOPS, IT'S JUST AN ILLUSION stuff is starting to annoy me.

"Ichigo Kurosaki...All of your battles took place in the palm of my hand."

Apparently, Aizen was behind everything that happened to Ichigo since he met Rukia and became a Soul Reaper. Aizen was sure that Ichigo would be the best subject for his research. There is one little mistake in the dialogue when Aizen says that Ichigo had never seen a Hollow until the night he met Rukia. That isn't true. Ichigo saw the Hollow that killed his mother when he was younger.

"I've known you from the moment you were born. You were born special. Because you are human and..."

And then Ichigo's dad appears in all his Soul Reaper glory. Ichigo is half-human and half-Soul Reaper. We already knew that, but this is Ichigo's first time hearing (and seeing) about it. He's surprised at first, but he takes the news pretty maturely and tells his dad that he won't ask questions and he'll wait until his dad is ready to tell him about it.

Ichigo finally has his battle with Gin Ichimaru, while his dad attacks Aizen. Gin is one of those characters that always has his eyes closed, but you know that when they open, he's completely serious about what he's saying or doing. As they fight, Gin comes to the realization that Ichigo is going to become even stronger than he is now.

"The Hogyoku's true power is the ability to read the hearts of those around it and realize their deepest desires."

The Hogyoku is pretty much the reason for Rukia losing her powers, and Chad and Orihime gaining their special powers. The Hollowfying of Shinji Hirako and the others was an experiment to verify the powers of the Hogyoku. With his suspicions confirmed, Aizen sent Rukia to Ichigo. It's kind of scary how much power to Hogyoku has, and something that powerful in Aizen's hands really isn't good--especially since he's fused with it.

Urahara makes his entrance using  a bunch of fancy Bakudo, Kido, and Hado, but they don't really seem to have done much of anything to Aizen. He didn't come alone, though. As Urahara and Isshin (Ichigo's dad) restrain Aizen--in his new creepy form--Yoruichi attacks from above. It's getting really old seeing all these different people attacking Aizen and barely leaving a scratch.

As Ichigo watches Urahara, Isshin, and Yoruichi fight Aizen, he begins to lose hope. With lost hope comes lost strength. If Ichigo wants to protect his friends, his family, and his town from Aizen, he'll need to regain the hope that they'll defeat Aizen and make it out alive.

His next series, Bleach, about a high school student who becomes a shinigami and fights hollows, was not such a failure. Bleach began regular publication in 2001. It has been running in Weekly Shonen Jump ever since.
Posted by Christina @ Biblio Thoughts at 2:56 PM