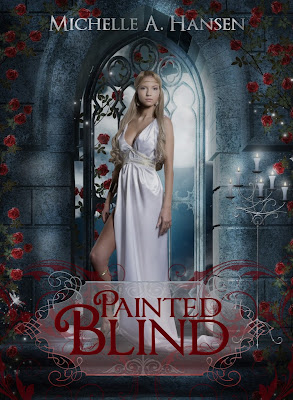 PAINTED BLIND by Michelle A. Hansen

THANKS TO READER FEEDBACK, PAINTED BLIND HAS GOTTEN A NEW LOOK!!

Seventeen years old and agoraphobic, Psyche Middleton vows her dad will never see the risqué photos she took during a summer modeling stint abroad, but one of them ends up on a billboard in her Montana hometown. Now everyone—especially her dad—can see it. And yet, somehow, those are the mundane things in her life because she is about to fall unexpectedly, head-over-heels in love with Erik, a mysterious young man who rescues her from a crowd of admirers, and who she’s never actually seen because…he can make himself invisible.

As strange as this may seem, it’s about to get even stranger. Erik takes her to his palace in an idyllic kingdom, and she is swept into the beauty and culture of his world, but his affection has one condition: she may not see him. Overtaken, intrigued, and still not wholeheartedly believing he’s real, Psyche is going to have to decide if she can love him blindly; because if she can’t, she may lose him forever. 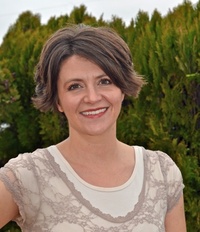 Michelle A. Hansen was raised in southeastern Washington. She earned her bachelor of arts degree in English teaching from Brigham Young University in Provo, Utah, and taught high school English for six years. She and her husband have four children.

http://www.michelleahansen.com
Posted by Christina @ Biblio Thoughts at 12:00 AM