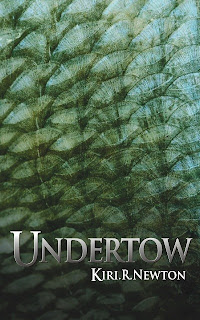 For far too long these sailor-drowning, ship-sinking sea sirens have been portrayed as happy, peaceful creatures who want nothing more than to fall in love with a prince and live happily ever after. Undertow is an unconventional twist on one of the oldest mythological creatures known to man.

Its weird right but as an author I could tell you about my characters inside out and yet when people ask me to talk about myself I go all quiet. Anyways, here I go.

I am a child of ‘91 born in Jandowae, a tiny little town out past Dalby. When I was five my parents decided to pack everything up and move to Tonga in the South Pacific after Dad visited there and mum fell in love with the place after reading a book about it. So I grew up in a third world country, fluent in a second language by the time I was eight and lived amongst the locals who I was friends with.

When I was thirteen my father passed away and due to the fact that the government refused to pay my mum a pension over there like they did my father, we were forced to move back to Australia.

As for my writing career, I started writing progressively longer short stories in Grade 5 where one teacher noted on my report card that ‘I had unique ideas and an unusual talent’. By Grade 7 I had completed my first novel a post-apocalyptic fiction where cats are the highest life form and live basically as we do and follows the lives of a litter of cats, the characters based on a litter of cats belonging to my neighbour. I continued writing different things from horsey stories to Phantom of the Opera fan-fiction right through my teenage years, nothing serious, mostly just a lot of scribbling.

In Grade 12 I realized that if I was going to be serious about being a writer I needed to finish stories, not just have a lot of random scribbles to my name. So forgoing all my assignments I finished my second book called Dynamite which is an Australiana tale about a racehorse. Two years later I went on holidays to Fiji, came home and three months later Undertow was completed. In the middle there I wrote a Tolkien-esque fantasy epic called The Dark Assassin with my now ex-boyfriend. The year after that I completed Hazardous, which will be my next published title.
Posted by Christina @ Biblio Thoughts at 12:00 AM