Tour: The Burning of Isobel Key by Jen McConnel (Review/Excerpt+Giveaway) 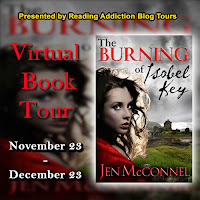 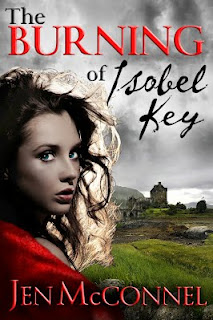 Summary: Lou is in the middle of a quarter-life crisis. Ever since college, she’s lacked direction, working as a clerk in a local bookstore. But when she quits her job just before the winter holidays, Lou must do some serious soul searching to overcome her fears of straying from the mainstream. On a whim, she accompanies her best friend, Tammy, to Scotland for the winter holidays, but the vacation soon turns into an emotional roller coaster.

When she becomes embroiled in a hunt for information about Isobel Key, a woman falsely accused of witchcraft in the seventeenth century, Lou opens up to her intuition and makes a startling discovery about her own heritage.

As the flames rose, Isobel stopped cursing and instead started to make a shrill, screaming whine, much like the sound of the sap boiling in the logs at her feet.  It was so eerie, so utterly un-human that even the executioner, a man long seasoned to the sounds of death, wanted to cover his ears and sob into the skirt of the nearest woman.
The sound carried from the village green, through the streets and wynds, penetrating the windows and doors shut tight against the execution.  It was as if not attending could erase the sin of allowing it to happen in the first place.  No one who heard that sound could reconcile it with the once melodious voice of the burning woman.  The evil thing at the stake was not a woman they remembered or recognized.
Their memories were as short as the day, from the morning after her terrible deeds were revealed and the witch was brought into town bound in the back of a pony cart.  It was suddenly as if none of the villagers knew the poor creature at all.  None could recall seeking her help, and none would avow that she had always been kind and ready to bake breads for town feasts or to watch the little ones play while their parents danced together.  Kindness lingers less than murder, for it was obvious to all that the woman had murdered at least three souls, if not countless others.  Justice was being served, and her blood would not stain the god fearing hands in St. Andrews.  She was not their responsibility, and they wanted to take no claim for her evil. 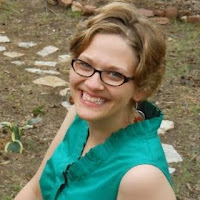 Jen McConnel first began writing poetry as a child. Since then, her words have appeared in a variety of magazines and journals, including Sagewoman, PanGaia, and The Storyteller (where she won the people’s choice 3rd place award for her poem, “Luna”).

She is also an active reviewer for Voices of Youth Advocates (VOYA), and proud member of SCBWI, NCWN, and SCWW.

A Michigander by birth, she now lives and writes in the beautiful state of North Carolina. When she isn't crafting worlds of fiction, she teaches writing composition at a community college. Once upon a time, she was a middle school teacher, a librarian, and a bookseller, but those are stories for another time.