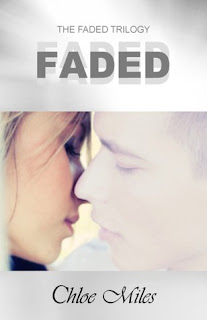 Summary: "Savannah wanted to kiss him, but she had never even kissed a human guy before, let alone a ghost. How was she supposed to kiss him if he wasn't really there?"

Savannah has never been in love before, but she's in love with Hunter Emmerton. He's cute, funny, charming...and a ghost. How can you date someone if nobody else can see them?

After seventeen-year-old Savannah Fraser and her three friends are killed in a car accident, they are given a second chance at life by a group of hundred-year-old teenage earthbound spirits who need their help.

Savannah and her friends learn that they are The Chosen Ones, which means they can switch between human and spirit form, heal people and control the weather. And they are also now invincible.

The Chosen Ones are the only ones who can defeat The Forces - a group of evil spirits who are slowly destroying the perfect little town of Fort Everwick with violent storms and not-so-natural disasters - and stop them from harming everyone they care about.

The Forces are set on destroying everything Savannah knows and loves, but they also have another plan - they want a new member to join them. They aren't willing to give up until they get the one they want...and they have Savannah firmly in their sights.

Savannah had never been confident in herself before, but with her new-found powers, she discovers just how strong herself and her friends really are. But what Savannah didn't count on was falling in love with Hunter. She's never loved anyone the way she loves Hunter and she knows he loves her too. But how can they be together forever if he no longer exists and she's the only one who can see him?

Will Savannah have enough belief in herself to defeat The Forces, or will they be able to lure her to the dark side and turn her against her loved ones...and tear her and Hunter apart?

Unique concept, but could use some fine tweaking.

Chloe Miles is the author of FADED, the first book in THE FADED TRILOGY. The second book in the series, SEE NO EVIL, is due to be released soon.
Posted by Christina @ Biblio Thoughts at 12:00 AM