Watch them today because...well, you get it.

It's the end of the world as we know it and Michael Stipe feels fine, but we couldn't let the apocalypse pass us by without putting together a list of the best apocalyptic and post-apocalyptic anime based on your responses. While others are gathering canned goods, fashioning spears out of household utensils and hoarding gasoline, Road Warrior-style, we're fastidiously compiling this list so that if the post-apocalypse has electricity, you'll have some good source material to consult for the harsh new realities you're about to face. And if you run into us in the irradiated wasteland of the new world, be sure to say "hi" and let us know which was your favorite.

High School of the Dead - There ain't no apocalypse like a zombie apocalypse because a zombie apocalypse don't stop. It comes back for seconds, actually. Number five on our list starts right at the outset of the end of days as a full-blown undead armageddon erupts in Japan, leaving a group of erstwhile high school students and the school nurse to fend for themselves as society breaks down. Don't worry - it's not all doom and gloom. Sometimes the end of the world comes with a heapin' helping of fan service, so the future isn't too bleak.

Fist of the North Star - Not only does Fist of the North Star take place smack dab in the middle of a post-apocalyptic world ravaged by nuclear fallout, but it might even teach you a thing or two about defending yourself in the bold new world (hint: be a bad-ass martial arts master). Using an innate knowledge of the human body's hidden vital points, Kenshiro kicks ass, takes names and justifies a pre-apocalypse career in massage therapy in one fell swoop. There may not be clean water in the dystopian future, but there will be blood, especially in this epic anime.

Tengen Toppa Gurren Lagann - Row, row, fight the power! Looking for inspiration now that Quetzalcoatl (or another feathered serpent god) is raining blood, fire and feathers from the skies? Gurren Lagann is your answer. The awesome fact that it's a Gainax-produced mecha anime notwithstanding, TTGL earns its apocalyptic stripes by presenting the story of a grim future in which mankind is forced to live underground by a ruthless monarch and the brave members of Team Gurren who took a stand against tyranny. Just remember, kids, if you can dream it, you can drill it.

Neon Genesis Evangelion - Were you surprised to see Evangelion here? Of course you weren't - because it deserves to be here. Gainax sure has a knack for the robot-and-monster-filled end of the world scenario, huh? Where Evangelion succeeds is in its depiction of interpersonal struggles and those big ponderous questions that people must face in the face of near-certain destruction. The tense life-or-death battles between the EVA Units and Angels are pretty freakin' sweet too, so you can have your post-apocalyptic cake and eat it too. 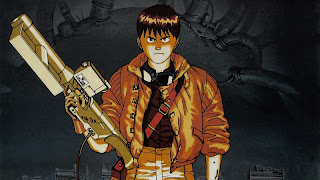 Akira - Hail to the king, baby. In your responses, Akira appeared more than any other title and for good reason. Katsuhiro Otomo's apocalyptic masterwork helped inspire a generation of anime fans and animators through its brutal examination of societal pressure, alienation and the corrupting effects of power vis-a-vis the tale of two childhood friends, Tetsuo and Kaneda. Whether or not the Mayans are right, we'll be more than happy to spend our final moments in Neo Tokyo, which is about to E.X.P.L.O.D.E.
Posted by Christina @ Biblio Thoughts at 3:49 PM