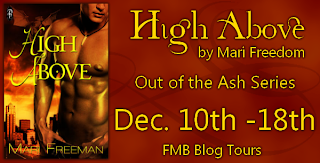 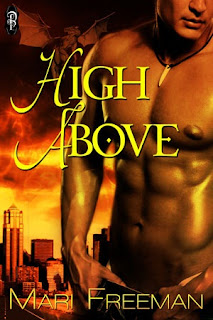 Rhone’s wings have been stripped from his body, his family killed, and his hopes of leading the Mountain people away from the constant threat of marauders destroyed.

Ketta’s life has been full of pain and anguish. Her brother rules her and the Lax tribe with a bloody fist. Tired of the violence, Ketta takes a stand and rescues Rhone from the brink of execution.

Armed with knowledge from Ketta’s somewhat addled grandfather, the unlikely pair embarks on a quest to heal Rhone’s wings. Along the way, the couple struggles to find the truth beneath hatred and lies. Desire and a mutual enemy bring them together; mistrust and secrets tear them apart. These lifelong foes will have to fly high above their differences to defeat a deadly dragon and save what’s left of both their tribes.

I really enjoyed High Above. Though this is a paranormal romance, it has touches of dystopia too. I've read about zombies, demons, vampires, and angels being the cause of humanity's near destruction, but not dragons. So this was a new, fresh take on the end of the world was we know it.

She was right. He could barely fight a strong all-human in his current condition. But waking a dragon? Really? He sank to his knees. She knelt in front of him, her expression much softer, like a mythical creature from a long ago dream. It wasn’t a premeditated decision, but he leaned forward, closing the space between them and brushed his lips across hers. She rocked back slightly, her ears turned forward; her gorgeous eyes concentrated on him.

He took her lips again, ensuring the contact was more than a light brush. She responded, closing the distance between them. His skin tingled when she put her hands on his shoulders. Rhone cradled her face, turning her head at a slight angle that gave him the most exposure to her.

They didn’t have time for desire. But, he might never have another chance to touch her. He wanted to feel her satiny skin, to savor her sweetness for just a moment. Her lips parted for him, and he explored her mouth. She tasted like the freshest water. His body reacted immediately to her unusual, primitive smell.


She pulled away and backed to the other side of the truck, shaking her head. “You must decide.”

Ketta put a hand up. “It’s natural. My scent calls to males. That’s why Nyx kept me separated from everyone.”

“It’s not just your scent.” He saw more in her than a breeding partner. But, that didn’t really matter either.

She scowled. “You have to decide now, Rhone. There’s no time. Will you give your people, both our tribes, a chance?”

By listening to the princess of the enemy tribe and waking a dragon? He couldn’t believe he was even considering it. “What am I supposed to do with the dragon once she’s awake? We’ve not considered that, have we?” 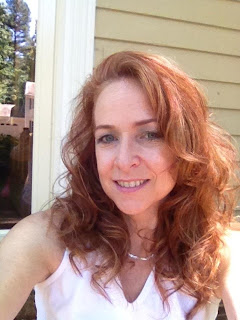 Life Changes. Mine sure has. I’m an exotic adventurer disguised as a normal suburbanite in central North Carolina.

In my previous lives, I’ve held an interesting array of occupations. I’ve been a project manager, used cars salesperson, a software testing manager, pumped gas at a truck stop and I worked in a morgue. I hold a degree in Forensic Anthropology from THE Ohio State University.

My favorite stories include alpha females in love with even more alpha males. I find the clash of passionate, strong willed personalities fascinating. I write contemporary, paranormal, and a little science fiction/fantasy.