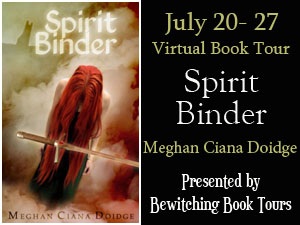 I'd like to thank Roxanne @ Bewitching Book Tours for giving me this opportunity to participate in the SPIRIT BINDER Blog Tour. And I'd like to welcome Meghan Ciana Doidge to ABTB! 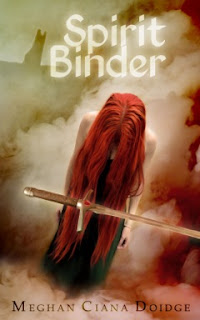 Spirit Binder
Book One of the Cascadian Chronicles

Description: Spirit Binder is a fantasy set a thousand years after spirit (aka magic) rises to take back the world in an apocalyptic event. It is book one of the Cascadian Chronicles.The first book of the Spirit Bound young adult series, TIME WALKER, will be released in the fall of 2012.


Theo woke severely injured, covered in blood, and missing ten years of her life. Just to complicate matters further, Theo was born under a prophecy; one that has rabid followers with three different interpretations, all of whom are willing to sacrifice her in order to fulfill it.

Not knowing if she can trust the stranger she’s betrothed to, the warrior visiting her dreams, or even her own mother, Theo tries to piece together her past only to find that her present is far more dangerous. It’s the power of her own blood that scares her most of all. This is a responsibility Theo never wanted, and a destiny she cannot deny, “All because of a prophecy she was trying not to believe in, but kept fulfilling.” 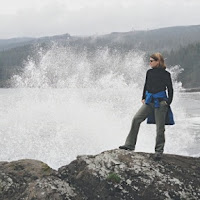 Meghan Ciana Doidge is an award-winning writer based out of Vancouver, British Columbia, Canada. She has a penchant for bloody love stories, superheroes, and the supernatural. She also has a bit of a thing for chocolate, potatoes, and sock yarn; though not all together, that would just be yucky.

For me theme drives the plot and structure of a story. Often, multiple themes are interlaced through a single story, but I always like to have a central theme that is connected to the main character. It is that character’s struggle to either deny or embrace (some times both) the theme that drives the story forward.

Occasionally it takes some time for me to find the theme, and usually that means the story isn’t quite working out, but more frequently I know at least the broad strokes of the theme pretty clearly after writing out the initial idea. The theme of Spirit Binder – the idea that drives the plot and Theo, the main character — is set up and complicated within the first chapter.

In the opening scene Theo wakes up severely injured, covered in blood, and missing the memories of the last ten years of her life. Her mind is in utter chaos, but one clear thought rings clearly through, “she’d been left for dead. Which was really foul, especially since, given the prophecy — depending on interpretation — the world went to ruin, more than it already was, without her alive.”

Many people, including Theo’s mother, believe that this prophecy speaks of Theo’s destiny. However, Theo is not a fan of having her every moment dictated by a destiny she isn’t sure she believes in. Nor is she interested in sacrificing herself to fulfill a prophecy that is subject to multiple interpretations.

Here is a snippet of dialogue between Theo and Hugh from the end of one of my favourite scenes in Spirit Binder.

“And you sneered at destiny this morning,” Hugh said, without looking at her.
“Circumstance is not the same as destiny.” [Theo replied].
“With you around, isn’t it?”

Later, Theo, overwhelmed by her own magic and the burden of responsibility, thinks that everything that has happened is, “All because of a prophecy she was trying to not believe in, but kept fulfilling.”

Hopefully, that provides a little insight when reading Spirit Binder.

Meghan
Author of After The Virus, Spirit Binder, and Time Walker (Fall 2012)
http://www.madebymeghan.ca
Posted by Christina @ Biblio Thoughts at 12:01 AM