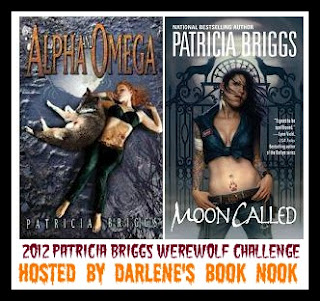 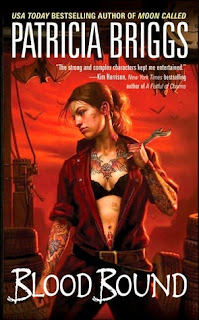 Summary: Under the rule of science, there are no witch burnings allowed, no water trials or public lynchings. In return, the average law-abiding, solid citizen has little to worry about from the things that go bump in the night. Sometimes I wish I was an average citizen...

Mechanic Mercy Thompson has friends in low places--and in dark ones. And now she owes one of them a favor. Since she can shapeshift at will, she agrees to act as some extra muscle when her vampire friend Stefan goes to deliver a message to another of his kind.

But this new vampire is hardly ordinary--and neither is the demon inside of him...

In Blood Bound, Stefan calls in the favor Mercy owes him and asks her to accompany him (as a coyote) to act as a witness to his meeting with a vampire in town without permission. When they arrive at the vampire's hotel room the situation quickly deteriorates, leaving Stefan incapacitated and Mercy trapped. When the sun begins to rise, Mercy is left injured and Stefan has altered memories of what happened in the hotel room. The hunt is on for the vampire-sorcerer, and until he's caught, no one is safe.

Though Blood Bound is about the vampires and the sorcerer terrorizing the Tri-Cities, what really stood out for me was the relationships between the characters. Whether the relationship is romantic or just friendly, they seem to take more a front seat than the hunt for the evil vampire-sorcerer. This gives us more insight into the characters and even the reasons behind why they do what they do within these relationships.

Tensions within the Mercy, Adam , Samuel triangle are at an all time high with the arrival of the sorcerer. Mercy is avoiding Adam because the power he has over her makes her uncomfortable. What time she does spend with Adam is making Samuel jealous, especially when she comes home smelling like Adam. Samuel and Adam try to stay out of each others way except when it's necessary for them to be in the same place. And now it seems like this triangle may become a quadrangle when Stefan tells Mercy that she's "important" to him.

There was a moment that I found just as terrifying as Mercy did. I think it would terrify just about anyone to wake up and find that your creepy enemy has found you while he's outside slicing your trailer to ribbons trying to get in. It's definitely a good thing that vampires can't enter your home without permission or invitation.

It was interesting to see how much power Mercy actually has within the werewolf pack. Because Adam publicly claimed her as his mate in front of the entire pack in order to protect her, she now has his rank within the pack, and since Adam is the alpha Mercy is next in rank in the pack. It's easy to see how most of the pack would not be happy having a coyote dominant over them.

When Warren is brought back severely injured and Adam and Samuel go missing in search of the sorcerer, Mercy comes to the rescue (really, what would they do without her?). While one enemy is destroyed, another is given pardon. Mercy can't accept that and goes hunting. What this action will mean for the future we won't know until later books, but it's bound to be another adventure. 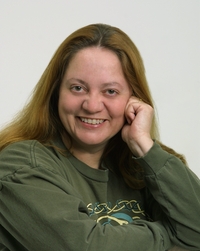 Patricia Briggs was born in Butte, Montana to a children’s librarian who passed on to her kids a love of reading and books. Patricia grew up reading fairy tales and books about horses, and later developed an interest in folklore and history. When she decided to write a book of her own, a fantasy book seemed a natural choice. Patricia graduated from Montana State University with degrees in history and German and she worked for a while as a substitute teacher. Currently, she lives in Montana with her husband, children and six horses and writes full-time, much to the delight of her fans.
Posted by Christina @ Biblio Thoughts at 4:23 PM