I'd like to thank Kismet Book Tours for giving me this opportunity to participate in the DANTE'S GIRL blog tour and providing me a copy of the book to review. 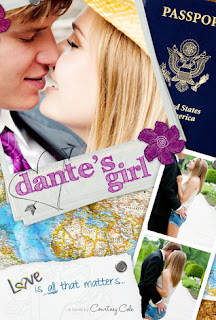 Tagline(s): Love is all that matters...

And this year, after a freak volcanic eruption strands me far from home, I have learned these things:

1. I can make do with one outfit for three days before I buy new clothes.
2. If I hear the phrase, “You’re not in Kansas anymore, Toto,” even one more time, I might become a homicidal maniac.
3. I am horribly and embarrassingly allergic to jellyfish.
4. I am in love with Dante Giliberti, who just happens to be the beautiful, sophisticated son of the Prime Minister of a Mediterranean paradise.
5. See number four above. Because it brings with it a whole slew of problems and I’ve learned something from every one of them.

Let’s start with the fact that Dante’s world is five light-years away from mine. He goes to black-tie functions and knows the Prime Minister of England on a first name basis. I was born and raised on a farm in Kansas and wear cut-off jeans paired with cowboy boots. See the difference?

But hearts don’t care about differences. Hearts want what they want. And mine just wants to be Dante’s girl.

Reece Ellis is on her way to board the airplane that will take her to London for the summer when she literally bumps into Dante Giliberti. Turns out they're both on the same flight, but as they are preparing to take off, another plane explodes! Thinking it might have been a terrorist attack, Dante and his security team exit the plane taking Reece with them. That's when she finds out who Dante really is: the son of the Prime Minister is Caberra and heir to the Giliberti Olives billionaire family.

When you're (happily) stranded in a paradise country with a gorgeous guy and his "epic hotness," is love enough when everything is working to keep you apart? Will Reece be strong enough to protect her heart?

OhMyGosh, I loved Dante's Girl! There is something about airport meetings that I find irresistible. I love the anticipation of finding out what will happen to the couple. And then there is the chance meeting that is just so romantic.

Reece is a down-to-earth Kansas girl. There is nothing I didn't like about her. What I loved most about Reece is that once she gives her heart to someone she doesn't accept anything less than what she deserves. She will not stay with someone who does not love her back. Reece has a great sense of humor, too. Her internal ranting and hysterics were so hilarious--I was laughing throughout almost the entire book.

Every girl at some point in their life wishes to be whisked away by Prince Charming. For Reece, that prince happens to be Dante Giliberti. Dante has princely charm and good looks, a great sense of humor, and he's even chivalrous. At one point, Dante defends Reece after learning that one of his friends bruised her arm. But like many princes, Dante's only real flaw is that he feels the need to please his father in everything, even if it makes him unhappy. This flaw in Dante causes Reece quite a bit of heartache, but she also can't deny the truth in his words when he tells her that he loves her.

While the romance is sweet and heart-wrenching, there's also a bit of mystery and suspense. When Dante's friend, Nate, is sen talking to a boy named Vincent from the farmlands of Caberra, Reece knows right away that something isn't right. Whatever the plan is, Reece is caught in the cross hairs and in the aftermath is evacuated and taken back to her parents. The question of what happened to Dante and if she'll ever see him again you'll just have to read Dante's Girl to find out! 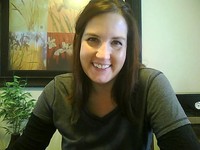 Courtney Cole is a novelist who would eat mythology for breakfast if she could.

She has a degree in Business, but has since discovered that corporate America is not nearly as fun to live in as fictional worlds.

Every Last Kiss is her debut novel and she followed it with the rest of The Bloodstone Saga (Every Last Kiss, Fated, With My Last Breath and My Tattered Bonds).

Courtney lives in quiet suburbia, close to Lake Michigan, with her real-life Prince Charming, her ornery kids (there is a small chance that they get their orneriness from their mother) and a small domestic zoo.

Learn more about Courtney and her books at www.courtneycolewrites.com