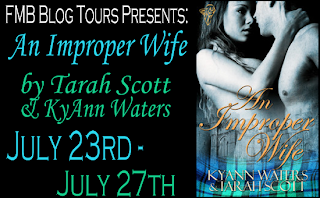 I'd like to thank Holly @ FMB Book Tours for giving me this opportunity to participate in the AN IMPROPER WIFE blog tour and providing me a copy of the book to review. There is a TOUR WIDE GIVEAWAY at the end of the post. 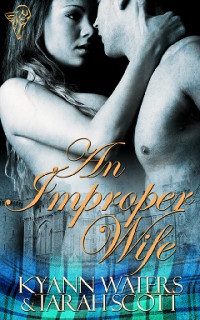 Summary: A proper young lady should never attend a Masque...Aphrodite is no lady.

Taran Robertson, Viscount of Blackhall, makes no secret that he despises his obligation to marry the Sassenach heiress chosen for him by his father. As a last foray before his wedding, he attends a masque. However, the spirited vixen he meets and seduces has secrets...secrets that just may reveal he’s to have an improper wife.

The setting is Newcastle, England, 1798. Lady Caroline Wilmont is due to marry Taran Robertson, Viscount of Blackhall, the very next day and become Viscountess of Blackhall. But this night she is Aphrodite, attending a Masque for a last chance at feeling any kind of passion before entering her passionless and loveless marriage to Taran. While fleeing to the gardens of the estate, Caroline meets the "kilted god" and he shows her a night of passion she'll never forget. But as the night winds down and it's time to part ways, Caroline recognizes the eyes of the "kilted god" as those of her soon-to-be husband. Now Caroline needs to deceive her husband into believing her to be the proper wife she's expected to be, not the passionate lover her had in Aphrodite at the Masque.

Taran Robertson has not hidden his resentment in being forced to marry is deceased brother's fiancee. During his last night of freedom, he attends a Masque at his friend's urging. The woman he meets in the gardens dressed as Aphrodite is a mix of "innocence and sin, Heaven and sweet Hell," and manages to bring him to his knees. But his Aphrodite has secrets. And as Taran is returning home to Strathmore with his new wife, Aphrodite's secrets hint that his wife may not be as proper as she seems. But who ever said that he wanted a proper wife?

I loved Caroline as the heroine. She's strong, opinionated, and stubborn. She stands up for what she believes in and doesn't back down from confrontation. And at the risk of losing everything, she tries to take her future into her own hands. That's what the night at the Masque is all about.

I was glad that Taran turned out to be the exact opposite of what Caroline thought him to be. I really liked how he would do pretty much anything for his family. And let's not forget that he's a gorgeous Scottish man with a delicious accent and wears a kilt. I mean, there's just something really hot about a man in a kilt. I'm sure you can all agree ;)

I really enjoyed Caroline's antics to get out of the marriage. My favorite was her black mourning clothes at her wedding. That was just too funny and took a lot of guts.

And the mystery surrounding Caroline's family and her father's death add a little something extra to this romance story.

An Improper Wife has it all: action (both in and out of the bed), adventure, and romance. I would read this book again in a heartbeat!

New York businesswoman and award-winning author Tarah Scott is published by Loose Id, Etopia Press, The Wild Rose Press, and Silver Publishing. Professional affiliations include Paper, Candlelight and Quill (PC Quill), where she is assistant director, and leads Word Zone, a weekly critique group, as well as participates in Creative Heights, an intense peer critique group. Tarah is a Southwest transplant to the Northeast where she began her writing career.