I'd like to thank Roxanne @ Bewitching Book Tours for giving me this opportunity to participate in the JACQUELINE PAIGE FICTION Book Promotion and for providing me a copy of TWICE CURSED to review. 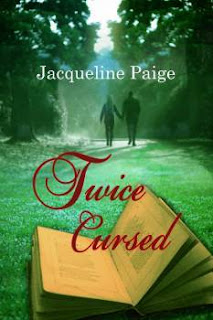 Summary: Maddy is the oldest witchling to ever attend the Hidden Cove Academy, having been cursed as a teen; she’s forced to have a solitary life outside of her own magical community. With her magic so dangerously unpredictable, she rarely takes the chance on mixing with the general public.

From one harmless trip to a museum she finds herself spellbound yet again by an invisible boundary, caused by a three hundred year old curse, dictating that Maddy must stay close to the stunningly sexy Colin.

Being stuck with a tall, dark, incredibly lick-able stranger can’t be all that bad, right? Until they discover if they get too close the spirits bound with the curse will take over their bodies ... at the same time if they’re too far from one another the curse will kill them both.

Will the curse's secrets be unravelled in time or does certain death await them both?

Maddy Darcy was the brightest student at Hidden Cove until she turned 15 years old and her mother passed onto the High Council. When her eyes changed color from green to turquoise, it was evident that someone placed a blocking curse on her powers, causing her to be the oldest witchling in the history of Hidden Cove. Now 27 years old, Maddy rarely ventures out in public for fear that her powers will cause harm to those around her.

When Maddy takes a rare trip to the museum to see an exhibit showcasing Scottish and Irish artifacts, she has a brief encounter with Colin Gregor when they are both viewing a Scottish quaich from the 1600's. Colin and Maddy go their separate ways, but Maddy feels a trace of magic from out of nowhere. Now Colin and Maddy can't be more than 60 feet from each other without intense stomach pains that get worse the farther apart they are.

It is discovered that Colin and Maddy are somehow tied to the Scottish vessel by a red aura indicating that the strongest emotions are involved in the curse. As time to find a way to break the curse dwindles and the future looks uncertain, one thing Maddy knows for sure: She's been twice cursed.

Forbidden starcrossed lovers, feuding families, and a curse of the past, all tie Maddy and Colin together now in the present. Robert MacGregor and Brenna Darcy--one from a Scottish clan, the other from an Irish clan--fell in love. But when their families found out, they were forbidden from seeing each other. Unwilling to part, Robert and Brenna ran away together. As their families chased after them, though, Robert and Brenna were killed in an accident, which then sparked a feud between the MacGregor and Darcy clans that lasted for over 60 years. In an attempt to bring peace to the clans, one of the MacGregor's placed a curse upon a quaich, stating that should a MacGregor and Darcy love each other and the bloodlines unite, peace will finally come to the clans.

I really don't think that Colin and Maddy find this curse very peaceful (and who uses a curse to bring peace?). Incredibly painful stomach pains assault them if they are too far apart and they start to "wither," but if they are too close the spirits of Robert and Brenna begin to take them over. Basically if they are too far apart they risk death, and if they are too close they risk possession. This is definitely not a peaceful way to bring about peace for their families. It doesn't hurt that Colin and Maddy were already attracted to each other before the curse took hold, so they aren't completely miserable being stuck with each other.

There were many great tension breakers that kept me laughing even after the last sentence. I loved Colin's reactions to the "dragon lady" Alice. The way she gets under his skin and cracks his carefully placed calm exterior is just too funny. And I can't forget to mention Sarabi's attempts at match-making. A huge black panther familiar trying to play cupid for a twice-cursed, 27 year old witchling and a gorgeous, shell-shocked science geek, is not something you see every day. 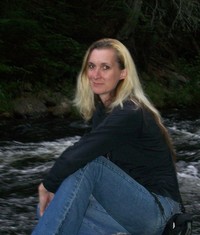 Jacqueline Paige is a world class multi-tasker being a mother to five adventurous and unpredictable children, a cafe manager and having a colossal imagination that allows her to step outside of reality into a world of paranormal romance —with just a touch of suspense.

Jacqueline lives in Ontario, Canada and avoids the ever changing weather of the region she lives in by creating other worlds to fall into in her stories of all things paranormal.

Her first book was published in 2009 and since then has published ten. She is always writing and currently has more than a dozen stories in one stage or another of the writing process.

You can find all of Jacqueline’s books at: www.jacqpaige.webs.com
Excerpt:
“There is just no way to tell you this without you thinking I’m completely insane.” He sat there giving her a puzzled look. “Do you believe in magic, Colin?”
He smirked. “Like a magician?”
Maddy shook her head. “Um, no. Although a few that play at that game of illusions do have special abilities. I’m talking about magical people, who can do spectacular things...”
Colin smirked again. “Like witches?” He chuckled. “Are you an actress; is that what you’re trying to tell me?”
The kettle whistled. Maddy turned to pour it. “No, I’m not an actress. I’m a hereditary witch.” She fiddled with the tea bags, not wanting to turn around and see his expression.
“I see.” He really had no idea what to say to that.
She knew by his tone he was probably plotting on how to leave as soon as possible now. “I’m not sure you do. Have you ever seen someone do something that you just couldn’t ex-plain? Or thought you were seeing things?” She shrugged. “We’re really not supposed to use magic in the general public, but some do, at a terrible risk.” She glanced over to look at him. His look said it all: he thought she was a weirdo.
“Okay. Uh, so is there a reason for telling me this?” Why did the beautiful ones always have to have some sort of mental flaw?
Maddy turned from the cups and crossed her arms over her chest. “Yes, actually I do.” She hesitated for a few seconds. “When we were leaving the museum I thought I felt a trace...that’s kind of a feeling you...my kind get when magic has been used close by or to you...”
“A trace?” He studied her for a moment. “Again, why are you...” He looked like he really wanted to give her a chance. Just in case she wasn’t insane.
She let out a quick breath. “I think something was done to us...the pains hitting, but then leaving just as quickly.”
Colin raised one eyebrow at her and crossed his arms. Now he probably just wanted to go home. “I’m sure there’s a much more...sane explanation for this.”
Sane? Of course he thought she was insane. How did she prove to him she wasn’t some lunatic? 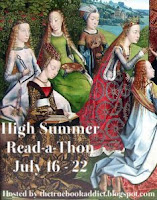 Twice Cursed was read during the High Summer Read-A-Thon
Posted by Christina @ Biblio Thoughts at 12:01 AM