Tour: The Seduction of Phaeton Black by Jillian Stone (Promo+Giveaway) 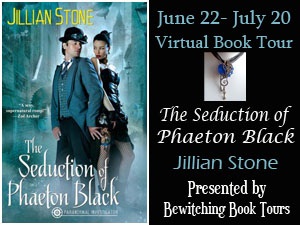 I'd like to thank Roxanne @ Bewitching Book Tours for giving me this opportunity to participate in the THE SEDUCTION OF PHAETON BLACK Blog Tour. There is a TOUR WIDE GIVEAWAY at the end of the post. Be sure to thank Jillian! 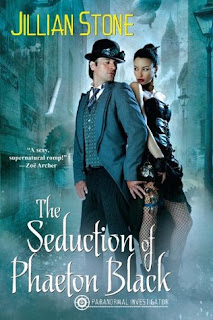 THE YEAR IS 1889 and Queen Victoria, exemplum of decency and sobriety, is in her fifty-second year of reign. Paranormal Investigator, Phaeton Black, on the other hand, couldn’t be less interested in clean-living. He has recently taken up residence in the basement flat of London’s most notorious brothel. A dedicated libertine with an aptitude for absinthe, he wrestles with a variety of demons both real and self-inflicted. Unfairly linked to Scotland Yard’s failure to solve the Whitechapel murders, Phaeton is offered a second chance to redeem himself. A mysterious fiend, or vampire is stalking the Strand. After a glass and a consult with the green fairy, he agrees to take on the case.

On his first surveillance, Phaeton pursues an elusive stranger and encounters several curious, horrifying beings. But the most intriguing creature of all is a Cajun beauty who captures him at knifepoint and threatens to spirit away his heart.

Jillian Stone’s Victorian Romantic Suspense novel AN AFFAIR WITH MR. KENNEDY won the 2010 RWA Golden Heart and is the first novel in The Gentlemen of Scotland Yard series for Pocket Books. Her sexy, supernatural Steampunk novel, THE SEDUCTION OF PHAETON BLACK, won the 2010 Romance Through The Ages Erotica category and sold to Kensington Brava. Jillian lives in California and is currently working on the next adventure for both series.

She had never met the like of such a man.
After a few deep draughts of spirit, he kicked a chair out from under the table and straddled the seat. “The chair rails guard my bulging privates. Not to be confused with filthy pirates.”
He took another swig from the bottle. “Tell me about these imaginary, cutlass wielding corsairs. Miss––?”
“My name is America Jones.”
He set an elbow on the chair back and cupped his chin. He had a wary way of studying her, as if she were some kind of curiosity. “Are you incapable of answering questions in a truthful manner? Again, Miss––?”
She set her jaw and glared. “America.”
“Is the name of a continent, or two. I can never remember if there are two continents designated north and south, or one continent designated south and north. Which is it?”
Why did he play the Mad Hatter? Leaning far back off the chair, he had to catch himself. The grog appeared to be having an effect. “And there is a new country, the United States of America.”
Even with arms tied down, she still managed a shrug. “It is my name, sir. America Síne Jones and I have learned to live with it these twenty-ought years.”
“I believe I may call you by your middle name.” His mouth twitched. “Sin–ay. I do so admire the first syllable.”
Her gaze narrowed to a quizzical squint. “Is your mind always in the gutter, Mr.––?
“Black.” Liquid sable eyes flecked with gold drank in every inch of her. “Only when I am interested, Miss Jones.”
“And are you interested?”
“I once enjoyed a meal at the Langham Hotel, which I thought about repeating for weeks afterward.”
“Is that what I am to you? A supper?”
He lowered his chin. “A banquet, my tempting dark dove.” Hooded ebony eyes crinkled at the sides. He enjoyed taunting her.
Captivated for a moment, she mentally slapped herself.  “I would love to stay and chat, really I would, but I must be on my way.” She flashed the faintest of smiles. “Now that we are introduced, certainly you can release me from bondage?”
“One more thing, Miss Jones. If you would kindly explain about the pirates?” He tilted his head. “Your eyes are most extraordinary. Almost feline.”
What an exasperating man! While he swigged from the bottle, she tugged again on her bindings. “Why do you insist on torturing me?”
She pressed her lips together and chewed the inside of her bottom lip. A force of habit when vexed beyond endurance. Well, she supposed two could play this silly, annoying interrogation game. “Are your parents still living, Mr. Black?
He sat up and blinked. “Mother died of a virulent meningitis years ago. My father teaches advanced mathematics at Trinity College.” He ran a hand through thick waves of dark brown hair. “He might as well be dead. We don’t get on.”
“I could not tell you if my mother is alive or dead. I’ve not been home to Louisiana in many years. Buried my father four short months ago. Charles Gardiner Jones.” She leaned forward purposefully. “A decent and honest merchant trader. Acquaintances said he couldn’t face his business failure––that he died of drink. People who knew him well, told a very different story. My father’s heart was broken by his lying, scheming business partner.”
When her eyes threatened to tear, she lifted her chin. “After his funeral I vowed to bring Yanky Willem to justice.”
“And how goes this pursuit?”
She frowned. “Not as well as I’d hoped. Last night Willem caught me rifling through a year’s worth of cargo manifests.”
He arched a brow. “Searching for––?”
“Proof of piracy, Mr. Black.”
He smiled that maddening grin of his. “I knew if I was patient, we might actually get round to the original subject of my query––the filthy pirates.”
“Chased me from the Docklands all the way down the Strand.” She laid her head back against the padded chair and counted the cracks in the ceiling. “When you stepped into the sharp edge of my blade, I was clean out of bullets.”
“Bullets? And where, pray tell is your pistol?
Now it was her turn to grin. “Untie me, and––“
“I think not, Miss Jones.” From behind protective rungs, Mr. Black stepped over the seat of his chair and ventured closer. “Shall we search together?” 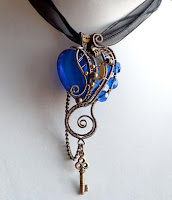