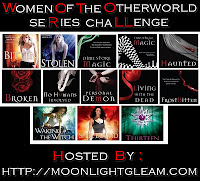 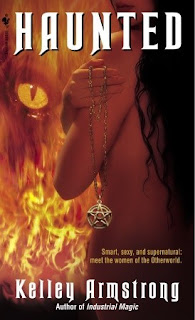 Tagline(s): The afterlife isn't all it's cracked up to be....

Summary: Former supernatural superpower Eve Levine has broken all the rules. But she's never broken a promise--not even during the three years she's spent in the afterworld. So when the Fates call in a debt she gave her word she'd pay, she has no choice but to comply.

For centuries one of the ghost world's wickedest creatures has been loosed on humanity, thwarting every attempt to retrieve her. Now it has fallen to Eve to capture this demi-demon known as the Nix, who inhabits the bodies of would be killers, compelling them to complete their deadly acts. It's a mission that becomes all too personal when the Nix targets those Eve loves the most--including Savannah, the daughter she left on earth. But can a renegade witch succeed where a host of angels have failed?

Eve Levine is used to breaking the rules, but she has never broken a promise once she's given it. The Fates are calling in the favor Eve promised in return for them returning Lucas and Paige to the living world. The demi-demon known as the Nix escaped her prison and has been roaming the world for about 100 years. After a number of failed attempts, the Fates are asking Eve to capture the Nix so she can be placed in an even stronger prison. The hunt becomes personal, though, when the Nix begins targeting those Eve loves the most--her daughter Savannah, and her guardians Lucas and Paige.

With the help of Kristof Nast, Jaime Vegas, and the angel Trsiel, Eve sets out to capture the Nix and protect her daughter. But with this mission being Eve's inaugural quest to angel-hood, Eve will need to choose between accepting angel status to better protect Savannah, or refuse and stay in the ghost world with Kristof. Whatever she chooses, it is forever and there will be no going back.

To be honest, I wasn't sure I would like Eve's story, or Eve herself. But I really liked Eve after reading Haunted. Eve really is a great mother and I can understand Savannah's love for her mother better now. Eve's dedication to Savannah, even in death, is so powerful, and her rage and frustration at not being about to protect and comfort her anymore is so heartbreaking.

Eve also brings out the better part of Kristof, Savannah's father. I even grew to like him a little. We get to see how Kristof really feels about Eve and Savannah, and his regret over missing so much in Savannah's life and what he missed out on with Eve before they both died shows a more caring side of Kristof that we didn't get to see when he was alive. I feel that if he had been given the chance, he would have made a pretty great father.

There were two tension breaking moments that I was really entertained by. The first was when Eve and Kristof scare Jaime's stalker ghost and the other haunters away. They definitely won't be bothering Jaime again. The second was when Jaime called Stonehaven to speak to Elena, but gets Jeremy on the line instead. Jaime is just too cute with how flustered she becomes just from talking to Jeremy over the phone.

If I hadn't been watching The Untouchables on MeTV for the past few months, I never would have noticed the reference to Eliot Ness in the Cleveland 1938 chapter when the Nix inhabits Agnes Miller. It's awesome when I notice references like that that others may overlook.

Anyway, I was glad that my first impression of Eve ended up being wrong. After reading Haunted, Eve has become one of my favorite characters in the Women of the Otherworld series. The next book, Broken, brings us back to Elena and the Pack where Elena has her own favor to uphold. 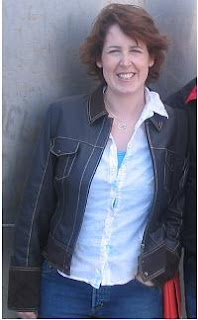 Haunted was read during the Once Upon a Read-A-Thon
Posted by Christina @ Biblio Thoughts at 5:13 PM