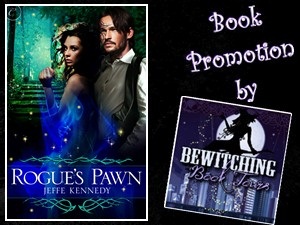 I'd like to thank Roxanne @ Bewitching Book Tours for giving me this opportunity to participate in the ROGUE'S PAWN Book Promotion. 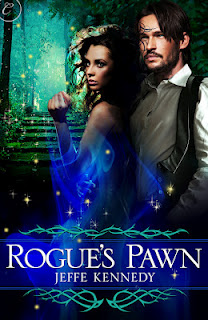 This is no fairy tale…

Haunted by nightmares of a black dog, sick to death of my mind-numbing career and heart-numbing fiancé, I impulsively walked out of my life—and fell into Faerie. Terrified, fascinated, I discover I possess a power I can’t control: my wishes come true. After an all-too-real attack by the animal from my dreams, I wake to find myself the captive of the seductive and ruthless fae lord Rogue. In return for my rescue, he demands an extravagant price—my firstborn child, which he intends to sire himself…

Her contemporary fantasy novel, Rogue’s Pawn, book one in A Covenant of Thorns, will be published in July, 2012. Jeffe lives in Santa Fe, with two Maine coon cats, a border collie, plentiful free-range lizards and frequently serves as a guinea pig for an acupuncturist-in-training. Find her on Facebook (https://www.facebook.com/Author.Jeffe.Kennedy) and Twitter (@jeffekennedy) or visit her at her website http://jeffekennedy.com/.

As if I’d ceased to exist, Tinker Bell blinked her eyes and regained her lovely self, face smoothing, shining once again in sunny elegance. Reboot and resume program. She gracefully stood and glided to the tray, set the bowl precisely in the center, lifted the tray and left the room without hesitation.

Booted footsteps crossed the room toward me. Act II, scene ii. Exit Nasty Tinker Bell, Enter God-Only-Knows-What-Now. My face was sticky with whatever the brothy stuff had been, my hair wet and fouled. I stank. I hurt. I was chained to a bed in a place so completely unknown I couldn’t begin to understand it. I tried to squeeze my legs closer together, but the chains seemed at the limit of their reach. The energy of my brief triumph evaporated, allowing tears to well up again.

“You’re certainly a mess.” His wry voice was rich and smooth.

My eyes snapped open to glare at him through the blur. Fifty different smart remarks flew across my tongue, most along the lines that any failures of appearance on my part could be laid on the doorstep of someone besides myself. But even the buzz of the first word on my vocal chords brought searing agony. Relieved to have a legitimate reason for the tears, I almost welcomed the searing sensation.

“No, don’t try to talk—no one needs to hear what you have to say, anyway. Not that we can help it, since you think so loudly. And you have a decision to make. We have a quandary.” He began pacing, boots echoing against stone. “No one can heal you while you’re bound in silver and we can’t release you from the silver until you have yourself under control. Which will take a considerably long time—perhaps years of training—if you’re even able to accomplish it at all.”

I thought of the birds crashing in increasing cacophony with a small shudder.

“Exactly,” he confirmed. “And yes,” he said from the window behind my head where he seemed to be gazing out, “I can hear most of your thoughts—another reason to save trying to speak aloud.”

My stomach congealed in panic. Had he heard my secret thoughts? Don’t think of them, bury them deep, deep. Think of other things…like what? Think of home, think of Isabel. Isabel, my cat—Clive hated her. What would happen to her now? How could I not have thought of her until this moment? Abandoned, wondering why I never came home for her… And my mother—she’d be frantic. How long had I been gone? They could be all dead and buried, lost to me forever. The anguish racked me.

“Shh.” The man sat on the side of my bed now, heavier than Nasty Tinker Bell. He brushed the hair back from my forehead, then placed his long fingers over my brow and, with his thumbs, rhythmically smoothed along my cheekbones, wiping away the tears that now flowed freely.

I stifled a sob. I had cried more in the past day than I had in years. The sweeping along my cheekbones soothed me, melting warmth through my skull. The rhythm became part of my breathing. Deep breaths. Smooth, easy. The awful tightness in my chest gave a little sigh and released.

“Let’s try again, shall we?” The man pulled his hands away. I could hear him brush them against his thighs. Soup, tears and blood. Yuck.

My eyes cleared enough for me to see him. Ebony-blue climbed over half his face. The winding pattern of angular spirals and toothy spikes swirled out of his black hair on the left side of his face, placing sharp fingers along his cheekbone, jaw and brow. For a moment, the tattoo-like pattern dominated everything about him. Ferocious and alien.

Once I adjusted, I could see past the lines. His face echoed Tinker Bell’s golden coloring. He could be her fraternal twin, with those same arched cheekbones. But where she was golden dawn, he was darkest night. Midnight-blue eyes, that deep blue just before all light was gone from the sky, when the stars have emerged, but you could see the black shadows of trees against the night. He shared Tinker Bell’s rose-petal mouth, but with a curious edge to it. I suppose a man’s mouth shouldn’t remind one of a flower, and there was nothing feminine about this man. Where she wore the pink sugar roses of debutantes and bridal showers, his lips made me think of the blooms of late summer, the sharp-ruffled dianthus, edges darkening to blood in the heat. His bone structure was broader than hers but still seemed somehow differently proportioned, his arms hanging a bit too long from shoulders not quite balanced to his height. Inky hair pulled back from his face fell in a tail down his back. One strand had escaped to fall over his shoulder and I could see a blue shimmer in its silk sheen.

He arched his left eyebrow, blueness in the elegant arch, repeating the deep shades of the fanged lines around it.

“Shall we?” he repeated.

I stared at him. What was the question?
Posted by Christina @ Biblio Thoughts at 12:01 AM