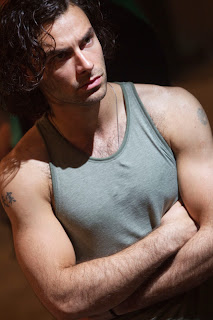 Aidan Turner is playing the part of Luke Garroway in 'City of Bones'!

Luke — Clary’s surrogate father figure, he has a hell of a dark past despite his current mild-mannered, bookstore-owning ways. The scars he bears belie his gentle heart — but he could tear you apart with his teeth if you threatened something he cared about.

He was terrific in Being Human and there’s massive buzz about his upcoming role in the Hobbit. He’s Irish so perhaps he and Robert Sheehan can sit around and talk about Irish things.

Looking more the flannel-shirt wearing Luke we know and love. Harald was so excited to work with him he was hopping around. I’m pretty excited about him playing Luke myself! Welcome Aidan!