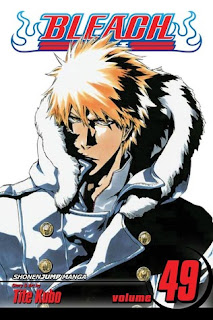 Summary: After the long battle with Aizen, Ichigo loses his Soul Reaper powers... Ichigo now leads a quiet and peaceful life until he is approached by a mysterious man. What does the man want and how does it relate to Ichigo's lost powers?!

Ichigo has lost his powers! But the world still goes round and danger is always around the corner. When one of his friends is attacked, Ichigo searches for a way to regain his Soul Reaper powers.

I thought it was pretty cool how this volume begins almost exactly like Volume One. It states the place, day, and time. Then introduces Ichigo. The only difference this time is that is says "I can't see ghosts." And the morning starts as crazy as always. Almost as if all the events prior never happened. But you can definitely see the changes they caused.

An interesting turn of events is that when Ichigo lost his powers, his younger sister, Karin's, powers increased. And now that Ichigo's not a deputy Soul Reaper anymore, Uryu takes care of the Hollows.

The thing about Ichigo and most warriors of any type in general is that, though they say they are happy with a normal life, they will always feel more comfortable in combat. In Ichigo's case, the reflexes and body he worked on as a Soul Reaper now help him in fights. This is proved when he retrieves a school bag from a thief running away with the owner chasing him.

That owner just happens to be Kugo Ginjo. Ginjo raises questions that Ichigo may not be able to or want to answer. Does Ichigo really know as much as he thinks he does about his dad? His own family? What does he really know about Urahara? This is how Ichigo is introduced to Xcution.

When one of Ichigo's friends is attacked by an unknown, Ichigo feels powerless to do anything to protect his friends. This leads him to call Xcution. Since Ginjo knows about Ichigo and his dad, he knows that Ginjo is no ordinary human, therefore he feels that Ginjo can help him. This is when Xcution's goal is revealed: For Ichigo to regain his Soul Reaper powers.

We don't learn much about the members of Xcution, only that they are humans with the ability they call Fullbring. One thing I wasn't expecting was for Chad to be one of them. If I think about it, if Chad is like them, wouldn't Orihime be too? It's definitely something to think about while reading future volumes.

Volume 49 is the beginning of The Lost Agent Arc, and though it's a slow beginning, it's bound to pick up and I doubt we'll be disappointed when it does. Tite Kubo knows how to keep his audience engaged.

His next series, Bleach, about a high school student who becomes a shinigami and fights hollows, was not such a failure. Bleach began regular publication in 2001. It has been running in Weekly Shonen Jump ever since.
Posted by Christina @ Biblio Thoughts at 7:00 PM